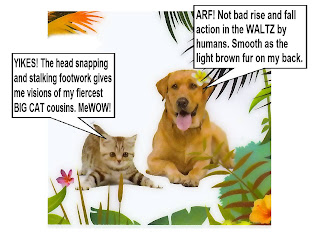 Our CSA Ballroom Dance classes are no different from any contact sport club be it the various style of dancing or the martial arts club. Lani and I are not too sure who in the first lesson are really serious about learning how to dance until the second lesson a week later. We had a few drop outs who decided to hang up their dancing shoes and not make a go of it. But those who decided to hang on after the first lesson of pure and simple basic test patterns, are now enjoying the fruits of their drive.
This past Wednesday, students at Kaiser CSA voted to go for 2 hours of Waltz instead of our usual one hour of Waltz and one hour of Tango (and they wanted to do the same next week and have the Tango lessons resume during the last three weeks). Got thumbs up from all of them for this arrangement and they enjoyed dancing the Waltz.
At Ali'iolani CSA on Thursday, we had a full house. Thanks to our volunteer assistants Dean, Richard, and Yvonne, Lani and I didn't have to work too hard in getting the students who are just getting by, up to speed. (Richard and Yvonne assists us at Kaiser CSA, also). We got thumbs up, also, at Ali'iolani CSA when everyone was sure about nailing down the dance steps and were tuned in on the same page.
So what's with the cat and dog, Frank? Well, there's a delicious story back of it....so ask me about it when you see me.
Posted by Frank at 12:41 AM

The Matsuri Hawaii Goodwill Dance at the Pacific Beach Hotel on Friday night was co-sponsored by IBDI. It was a good fund raising cause to aid the Japan Disaster Relief Fund. Lani and I had gone to last year's Matsuri Dance and had a good feeling that this year would be just as or more spectacular than last years. But first we had to get there early enough to find a parking space. Traffic wasn't too bad leaving Hawaii Kai at a little past 5PM. However, we ended up on the 5th floor parking area with other cars still searching for a parking spot. 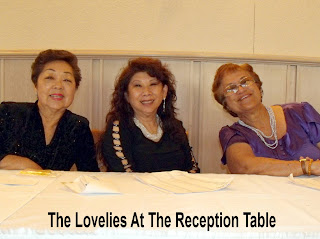 When we got to the Grand Ballroom on the 7th floor, we could hear the good dance music. How could you blame this couple for waltzing to the Lovelies: Shirley, Delia, and Dana at the Reception Table . 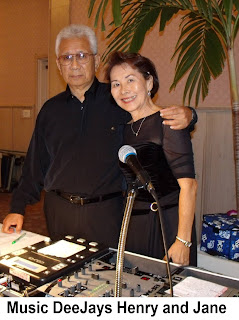 Inside the Ballroom, there were only a few dancers on the floor. It was a good time to warm up before the big crowd got to fill the dancing area. The DeeJays were Henry Lee and Jane; a terrific duo whose dance music are vibrant and spellbound that makes anyone to get up and dance. General dancing continued till it was time for the host to take the mike for the welcome speech. 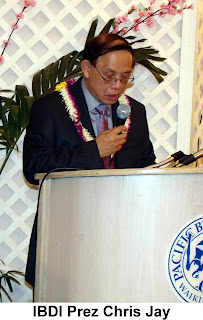 Host speaker was IBDI Prez Chris Jay who introduced the Japan delegation, the live band, the superb professional singer Kaori, and the exciting showcase performers. Two representatives from Japan came to the podium to speak up their appreciation of this dance event. 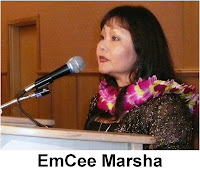 The EmCee was Marsha Nanomiya who was the event interpreter that welcomed the visiting Japan guests in Japanese and later said the invocation before the buffet dinner. Incidently, the delicious entries were a good fit for the guests from Japan, and the entire program was well organized.

It had a touch from that wonderful lady Grace Nohara in them. Appears that everything she touches turns golden and this years Matsuri Goodwill Dance certainly showed it. Kudos also the many hands who made this event successful.

It was time to get everyone on the dance floor to dance and IBDI Prez Chris quickly announce the "SnowBall". I think the best "ice-breaker dance" is the "Snow Ball". It is effective in getting even the most ardent seat-warmer off the chair to dance. No, not the old fashion Waltz but the heart thumping Cha Cha and the sensuous Rumba did the trick. 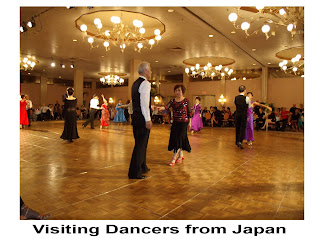 Time was set aside for the dancers from Japan to showcase their rendition of the Cha Cha, Tango, Rumba, and the Waltz. It was a good gesture and an opportunity for the visitors to show that they have showcase talents, too.

It was a big surprise when professional singer Kaori and the Band from Japan took to the stage. It's been a very long time since dancing to live band music. The five member band and Kaori belted out the best array of dance music that ever played for a dance since the days of Del Courtney at the Sheraton Waikiki. 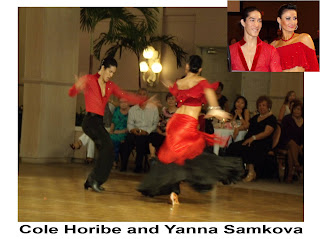 Showtime started at about 9PM with the exciting Paso Doble by professional teacher Yanna Samkova, and Cole Horibe. There was no calming of the storm of this performance as every move was like precise lightning strikes with high flying elevations by Cole. It was a terrific performance filled with passion and excellence. 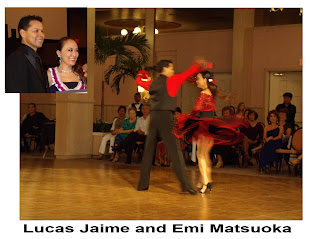 Pirates of the Caribbean kept the temperature rising as professional teacher Lucas Jaime, and Emi Matsuoka continued the tempo with a dynamic medley of dances ala a touch of Tango and Paso Doble. 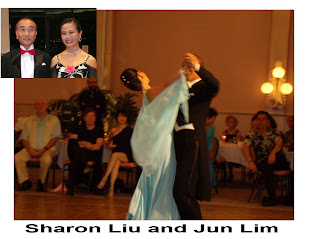 A delightful International Waltz by professional teacher Sharon Liu, and Jun Lim soon followed. It was the only Standard dance in the showcase and it was well performed. 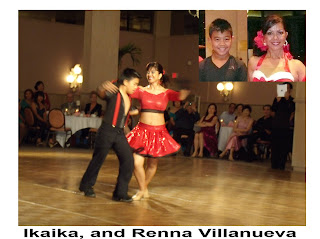 "The young and the restless" as professional teacher Renna Villanueva, and grandson Ikaika were introduced put a new twist to freestyle Jive dancing. It was very entertaining and a marvelous display of showmanship. 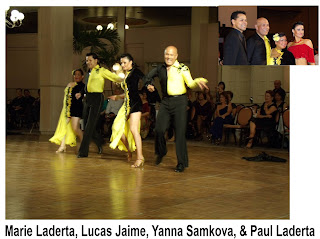 Marie and Paul Laderta joined Yanna and Lucas in this colorful performance of "Algeria". It was a fast moving performance and very well performed by the foursome. 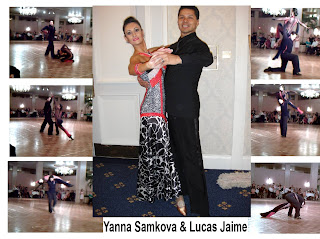 The Professional Showcase featured Yanna Samkova and Lucas Jaime performing a cabaret style dance to "This Love". It had artistry, balance, passion, and strength in motion at its very best.

After the Professional Showcase, Kaori and the Band provided the music for general dancing. Portions of the ticket sales was donated to the Japan Disaster Relief Fund.

The music was still hot to trot when Lani and I left for the drive back home. It was a terrific evening of social dancing, a wonderful showcase, fine food, and most of all socializing with good friends. We certainly enjoyed this year's Matsuri Goodwill Dance and I gotta admit: We Danced Our A** Off.
(Left click on photo to zoom in)
Posted by Frank at 10:47 PM

Well, Friday morning finally came and I gotta say that its been a tough week for Lani and me; dancing filled our agenda for the past four nights. Our long time friend Salome opened a Line Dance class at the New Hope Diamond Head Auditorium and Lani and I had made plans to go for the Grand Opening. Our legs were pretty worn out from all the dancing the past few nights and climbing the stairway to the second floor was like climbing those numerous steps in China's Forbidden City. 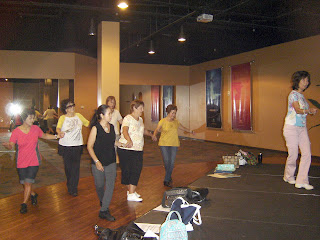 Anyway, we got to the auditorium while Salome was conducting the Line Dance class. Just a few students compared to her other classes but a very enthusiastic and friendly bunch....okay, I mean ladies since there were no men. The time of day may be a factor but since it was just the first day, there is hope the morning class will catch on. Another factor was that parking at the Kahala Mall was at a premium due to an Antique Car Show. AUWE!
Posted by Frank at 10:29 PM 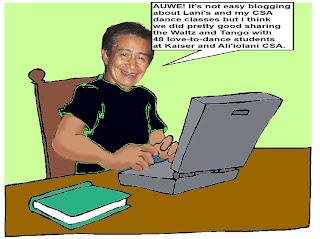 Our six weeks session got underway this past Wednesday at Kaiser CSA, and last night at Ali'iolani CSA. There were some students who enrolled later and some just before the class started. So we had no idea how many students to expect for our Waltz and Tango classes. Despite having three ladies without partners at Ali'iolani CSA, I think all went well for the two CSA's first classes.
Posted by Frank at 1:54 AM

Once Again A Student of Dance

We're all Students of Dance until such time we've reached a level where we can learn no more. But for the time being, Lani and I haven't thrown in the towel; we're still learning. 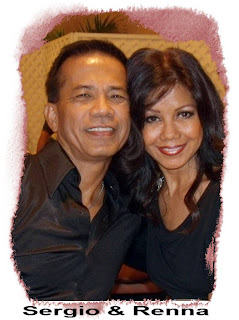 The Monday night Samba class with Renna and Sergio at the Palladium was invigorating and fun. Renna calls it Samba Variations and we're learning dance techniques as well as floorcraft with the variations. 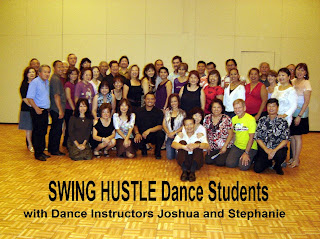 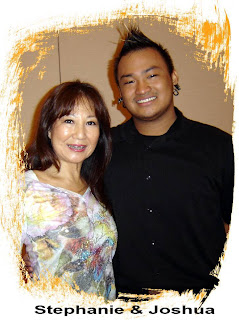 We got through the basic steps and then learned four more new steps during the remainder of the 45-minutes session.
During the break between dance classes, Joshua and Stephanie gave a demo of the NightClub 2 Step which starts on Wednesday (6/15) at Hale Ikena. Then Richard and Lynn demonstrated the International Tango and Quickstep that are ongoing on Thursday nights. The second class followed with the American Social Waltz by Robert and Vanelle.
Posted by Frank at 10:32 PM

It was the very first social dance and dinner organized by Richard and Lynn Nakamura at the Hale Ikena on the grounds of Fort Shafter but certainly not the last. In attendance were many dancers from various dance organizations that made this initial event a successful one.
When Lani and I arrived at the Hale Ikena, there was a long line of dancers ordering their dinner of the night's special Mongolian Steak in any way you wanted it prepared. Everyone in line paid for their dinner and waited to be served at their table; almost like a combination of Buffet and Fine Dining and it worked well for all concerned. As for Lani and me and maybe for a few other light eaters, an onolicious Rueben sandwich with fries is adequate for our appetite being that the sandwich was large enough for two. We were seated at a table with a friendly bunch; some were friends and others were faces we had never met before but everyone got into the social conversation. 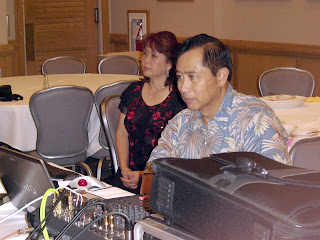 A few dancers got on the nice dance floor while others were putting a finishing touch to their entree and dessert. The music DeeJays were Henry and JoAnn Rimas who we met at the Las Vegas Extravaganza last month. They played good danceable music that put more dancers on the dance floor and soon it became a crowded affair. Even the DeeJays got to dancing, too. 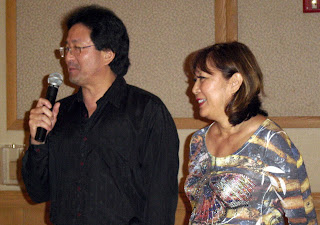 During the intermission, our host Richard and Lynn introduced the dance instructors who taught during the previous session Tuesday and Thursday night dance classes, Unfortunately, Andy and Monica Pascua who taught the American style Cha Cha were not present to be recognized because of the death of a family member. New instructors for the next session were introduced for the Waltz and Swing Hustle; respectively Robert & Vanelle Hirayasu, and Joshua Manzano & Stephanie Shimizu. Also high lighted were Elsie McGrew and Joshua who will teach on Wednesday night Line Dancing followed by NightClub 2 Step by Joshua and Stephanie. Lani and I were introduced as assisting in the Tuesday night class. Social dancing continued until the break for Showtime. 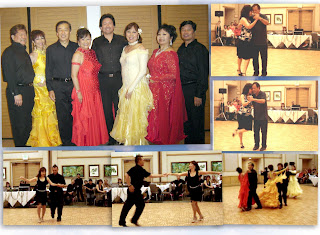 To gear up for the next session, Joshua and Stephanie danced an impromptu demo of the Swing Hustle, Lani and I think they did pretty good considering it wasn't choreographed and was put on at the spur of the moment.
The Argentine Tango danced by Robert and Vanelle was also a spur of the moment thing but they demonstrated the dance very well too.
The finale was the International QuickStep by the IBDI Formation Dance Team choreographed by Richard and Lynn. It was like dejavu. The QuickStep was danced at the Las Vegas Extravaganza and again it was perfectly done last night. Team performers were Larry Arinaga & Candace Yap, Edward & Candy Matsuda, Richard & Lynn Nakamura, and Roy & Marsha Ninomiya.
More social dancing continued and the dance floor got crowded to the max. It was an enjoyable evening of socializing and dancing, with a colorful and welcomed showcase.
Posted by Frank at 1:09 PM