It was a good crowd of dancers at the Aloha Dance Club 43rd Anniversary Ball last night at the Palladium. My main squeeze Lani and I got to the Palladium about 7 o'clock and we were greeted personally by our host Gordon Wong at the entrance. Gordon, who is the President of Aloha Dance Club had invited Lani and me as his guests. Familiar faces with welcome smiles manned the Reception Table as we picked up our bento.

The dance floor was filled with dancers as we entered the ballroom as smooth Waltz beat fill the air. Music DeeJay was Henry Lee and assistant Alan.

The EmCee acknowledged Special Guests in the audience including Professional Teachers and Presidents of the various dance organizations on Oahu.

One VIP introduced was Herbert Omizo who helped the Founder and Dance Instructor of Aloha Dance Club Lois Takeuchi way back on September 15, 1974 (43 years ago) when the club originated at the Richard Street YWCA in Honolulu. ( Herbert received a lei of friendship). Also recognized was Annie Ferguson for her assistance for selling "tonight's event" tickets. (Annie could not  attend last night's event due to illness). Also recognized was Musicman Henry Lee for his music, and the kitchen staff  directed by Jane Umeda for preparing the snacks. Special thanks went to Arthur and Joan Oda of New Aala Bakery for the delicious cookies.

A special announcement "we do have extra" was made to those who did not purchase advanced tickets for bento.  They were directed to go to the kitchen side and pick up a bento while supplies last.

General dancing continued till time to start the showcase of exhibition dancers.

It began with Musicman Henry Lee and Kayo performing an impromptu dance of the West Coast Swing. A brief bio of the dancers before the performance: Henry Lee started dancing in 1981 with HBDA and IBDI (formally IBDC) at the old Ala Wai Rec Center. He started playing music in 1998 for HBDA, IBDI, and Aloha Dance Club. He is also a daytime DJ on Mondays for the noon time dancers.
Kayo is originally from Japan and started dancing in 1975 with Aloha Dance Club under the late Founder Lois Takeuchi. She is a member of IBDI, Pan Pacific Ballroom Dance Society, USA Dance Honolulu, and Dance Magic 808. 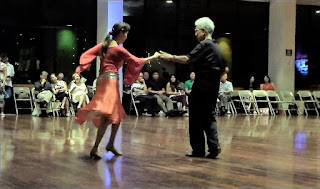 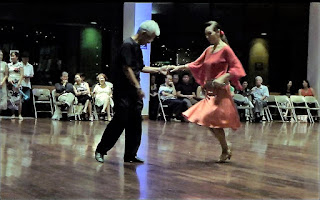 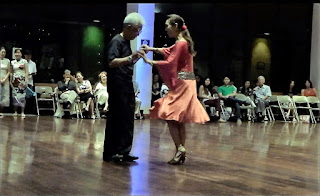 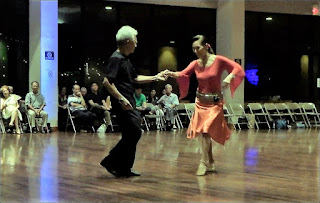 Next performing a solo was Teri Suki. A brief bio of Teri before her performance: Teri Suki was born in Bolivia and raised in Spain. She is a performer and competitor in many prestigious Latin events such as World Latin Cup in Miami and the Ultimate Latin Cup in Las Vegas. Creativety, diversity and lots of fun define Teri's dancing styles. She has traveled extensively in Costa Rica, Cuba, Los Angeles, Las Vegas, and Seattle. Teri has extensive training in Ballet, Contemporary, Flamenco, Jazz, Salsa, and Bachata. Her saying is "I love dancing and sharing because it brings happiness to your soul". 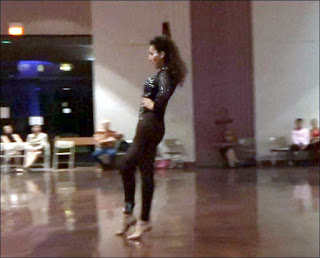 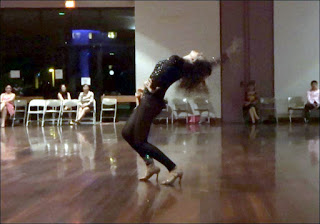 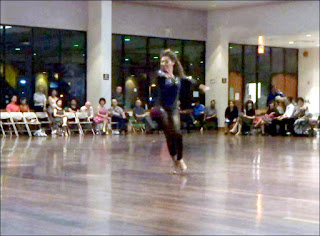 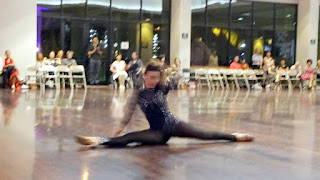 Followed by the Foxtrot/Waltz Medley performed by Ivan John and Spring Liang. A brief bio: Ivan John has been dancing for about 10 years and has competed in the Hawaii Star Ball, as well as nationally on the mainland USA. Spring Liang is from Shenzhen City, China. She has been involved in dance and teaching for the past 20 years, and won countless awards in China. After immigrating to the United States, she continued her learning, participating in competitions as well as dancing in stage performances. Her sincere hope is to keep teaching, improving her skills and making new friends in these beautiful islands that she and her family have come to love. 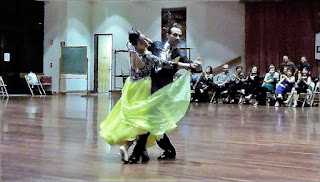 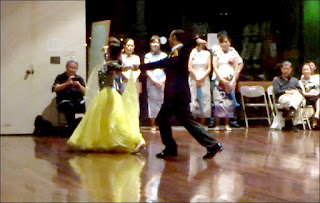 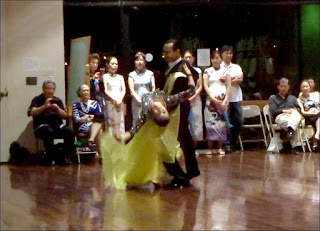 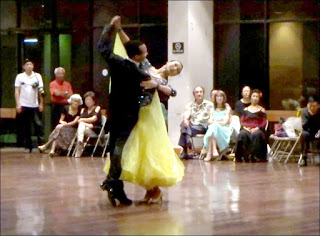 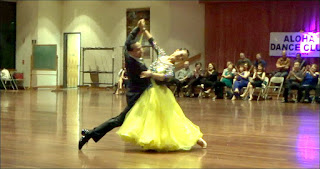 
Aloha Dance Club was honored last night to have the All Star Dance Group under the direction of instructor Lan Lan perform a dance entitled, "Rainy Alleys Little Town". A brief bio: Lan Lan is a professional dancer and has studied Chinese and ethnic dance in Mainland China. Members of the dance group come from different parts of Asia and because of their passion for dance has drawn them together young and old. The dance they performed depicted beautiful ladies from the southern area of lower Chong Jiang River dancing in the rain like Gene Kelly's "Singing In The Rain", stepping gracefully and gingerly while weaving through paths of glistening puddles. The dance simulated the celebration of the coming of Spring Showers and freshness of air. The dancers were Nancy Chow, Mia Huang, Tiffany Chun, Angel Lai-Rosenfeld, Eemi Lam, Meilian Nie, Wan Ping Oshiro, Jinsong Riles, Jerri Siau, Melanie Siu, and Shirley Wong. 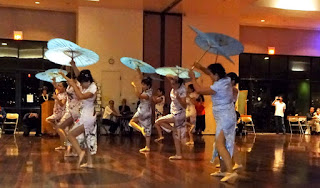 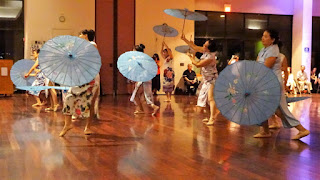 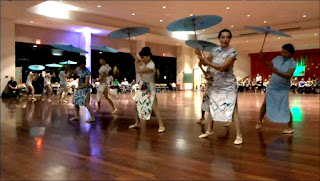 Concluding the exhibition part of the program was a fast moving Paso Doble performed by Calvin and Debra Ota. A brief bio: Calvin and Debra are students of Mr. Albert Franz. They have been dancing for about 10 years and are National Champion 10 Dance Finalists in the over 50 Category. The Paso Doble is a Spanish Dance portraying the Matador and his Cape. The dance became popular in Paris around the 1930's but many of the figures have French terms. However, the Paso Doble comes from a Spanish folk dance which means "two step" and is danced to 2/4 time with Spanish Marching Music. 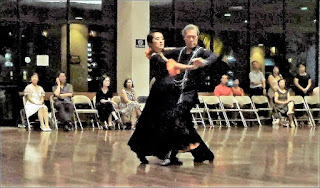 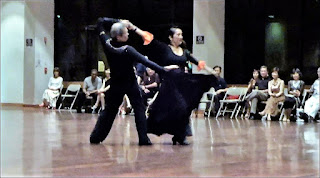 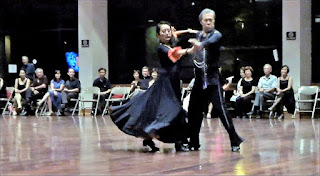 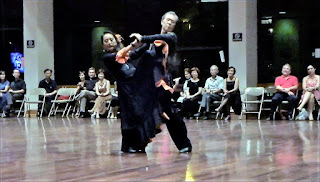 After the conclusion of the showcase of exhibition dancing, the performers came back on the dance floor to received awards of appreciation and picture taking. 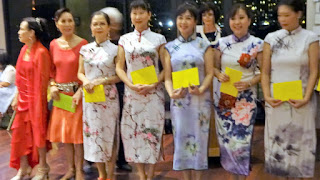 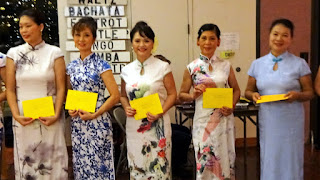 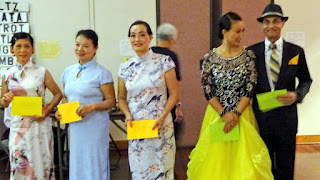 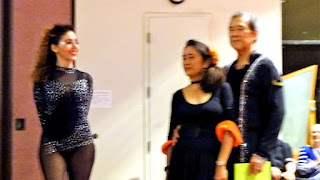 General Dancing continued till closing time. At this time I want to thank Lady EmCee Dianne Ako with a Big MAHALO for authoring and sharing this blog about the Aloha Dance Club 43rd Anniversary Ball.  Also much thanks to Aloha Dance Club President Gordon Wong for inviting Lani and me as his VIP guests to this event.  Hasta la Vista fo' now and Happy Dancing! 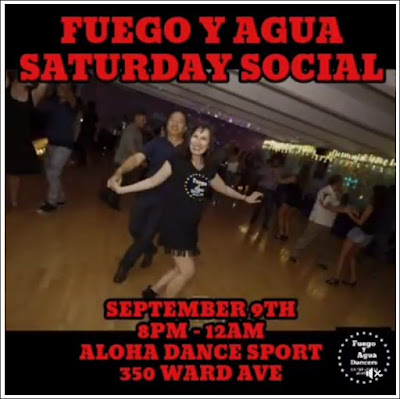 Hola Dancers! Every once in a while I like to flash back when and how I started blogging about dance news. Most of the credit goes to Pepe Martel, the owneru and publisher of "Dancing In The Dark" mini-magazine. Since Pepe moved to the West side of Oahu, he's been covering news of the  dance venues in the Leeward and Central Oahu dance community. There's a "hot" new dance studio in Waipahu that hosts social dance parties on weekends, and once a month a "Oldies But Goodies Dance Party".  Also featured is Paul & Marie Laderta hosting a Filipino dance event. These events are held at Sergio & Renna's Dance Appeal Dance Studio. You might want to keep tabs on Pepe's  Platinum Horseshoe blog for more info about dance events in Leeward and Central Oahu.
Happy Dancing! 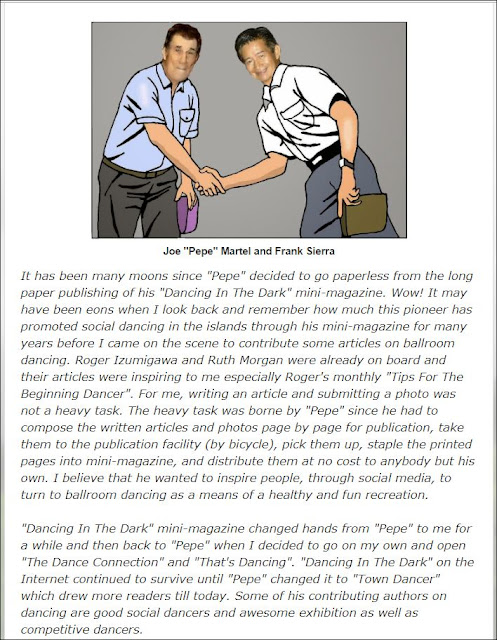