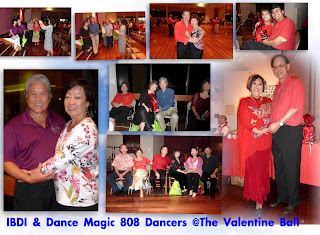 If you missed going to the 2012 Valentine Dance at the Palladium this past Sunday, then bro, you were not one of the more than 300 dancers who enjoyed a weekend evening of more dancing time, ono chicken bento, door prizes for the lucky ticket holders, free, yes free photo portraits by HUMANA, and a showcase of exhibition dancing. Sometime back, the Valentine Dance was billed as a Seniors event but this past Sunday the dance was opened to all age group. Just sparking the dancers in the ballroom, many of them couldn't qualify for a Zippy discount card, yet. Yeah! the young ones outnumbered the makule guys and gals. But then, looks can be deceiving cuz ballroom dancing can make a person look younger and full of energy when they glide around the dance floor with ease like a spring chicken (not literally, just metaphor speaking). Many of the dancers were from various dance clubs but fo' sure IBDI and Dance Magic 808 were there scattered all over the ballroom. Luckily, I was able to corner some of them for a photo shot. 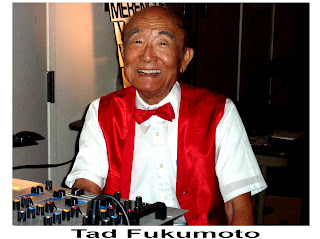 As I mentioned, there were lots of time for dancing from 5 o'clock till 7:45 when the EmCee took to the mike. DeeJay for the evening was Tad Fukumoto, dance instructor for Makua Ali'i. Music was okay for dancing but since the sound system at the Palladium was not utilized, larger speakers would have served better to spread the sound of music more evenly throughout the large ballroom. 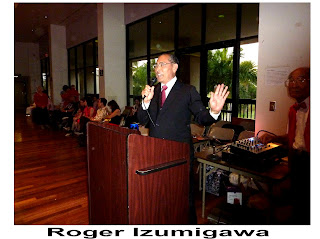 EmCee was Roger Izumigawa who kept the program moving at a smooth pace. Herbert Omizo was honored for ticket sales. 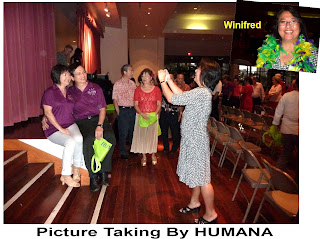 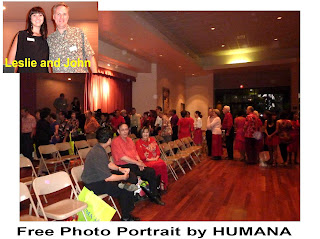 HUMANA, the firm that "represents companies that offer the products and services you may need in order to be better prepared for the future" gave away the free photo portraits. Gal photographer was Winifred who must've over worked her point-and-shoot camera over hundreds of time. By the way, she's quite a hoofer dancing the Electric Slide. Her side-kicks were Leslie and John who converted the images from camera to real time photo. There was another gentleman who inserted the photos into folders. Man, dat's class. Kudos to all four reps from HUMANA. 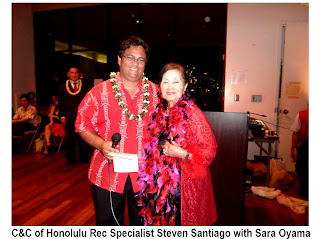 There was a "Mixer" to break the ice so to speak to get most of the seat warmers on the dance floor.....the Electric Slide Line dance and the Horseshoe Dance...that was coordinated by Sara Oyama. But before the "Mixer", EmCee Roger introduced Recreation Specialist Steven Santiago who delivered a message from the City & County of Honolulu. 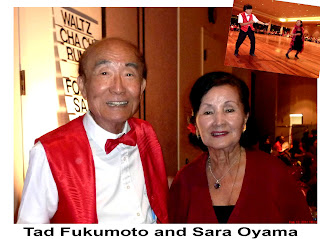 More general dancing followed till it was Show Time which went pretty fast. The showcase opened with the Jive performed by Tad Fukumoto and Sara Oyama. It was an entertaining Jive exhibition and you gotta give credit to them for getting into the act. Except for the Jive, there were no other Latin exhibition dancing. 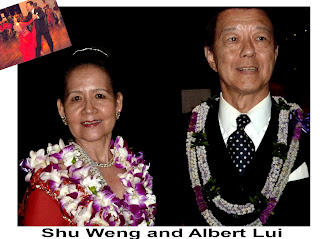 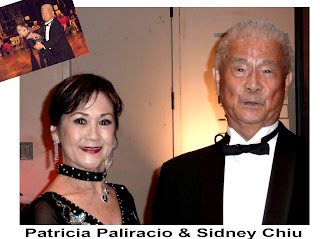 There were two International style Tango...first by Albert Lui and Shu Weng, and then by Sydney Chiu and Patricia Paliracio. Both performances were magnificent. Lani and I saw Sidney and Patricia perform the Tango on TV and they looked just as good in person. 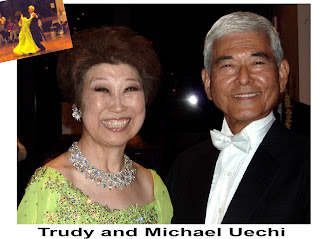 Dr. Michael Uechi and wife Trudy danced another superb performance. This time with the International Waltz. 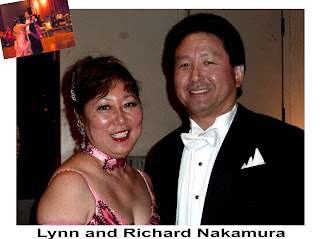 
There was a break for awarding door prizes to the lucky ticket holders and then refreshments was served. General dancing continued till closing at 9:45.
(Left click on photo to zoom in).
Posted by Frank at 7:56 PM