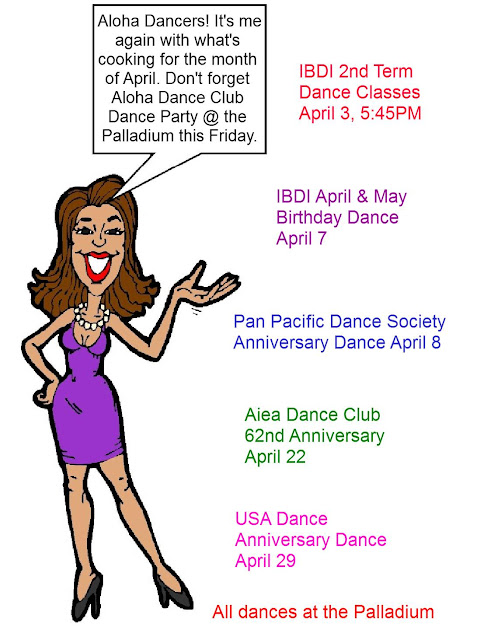 WOW! What a tremendous and electrifying showcase Hawaii Gardenia Circle hosted Saturday night at the Palladium. Gayle Kawahakui and committee did not spare anything to bring a dance exhibition showcase and a dance competition in one program under one roof and in one evening. My main squeeze and I got to the Palladium shy of 7PM. General dancing was in full swing since 6PM and I gotta tell you; the dance floor was already filled with dancers burning the floor to the upbeat music from the collection of DeeJay Bert Burgess. 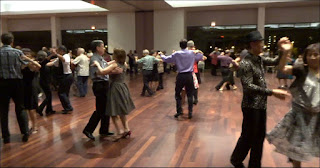 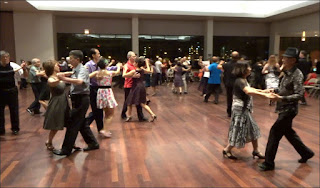 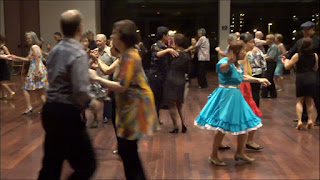 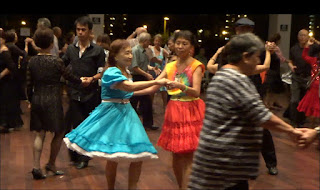 Lani and I gotta mention our appreciation to  Aiea  Ballroom Dance Club Prez Deanie Bates for giving up her seats for Lani and me. What a gracious gesture from a gracious lady!  Thank you, Deanie.
The program lady emcee was Shari Berinobis who welcomed owners/teachers of professional dance studios and presidents and representatives of the various dance organizations. Among the professionals were Mr. Geoffrey Fells, Mr; Albert Franz, Sergio and Renna Villanueva, Carlos Chang, Arthur Murray Dance Studio, Divino Ritmo Dance Lucas Jaime.. My apology if I missed any professionals. 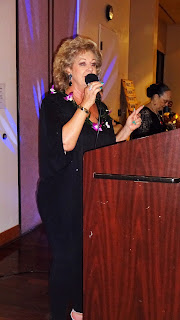 Greeting us at the door was the prez of Hawaii Gardenia Circle and the lovelies at the reception table.


The program started at 7:45PM featuring the showcase of dance exhibitions. There were some group performances as well as solo performances. 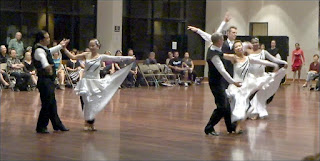 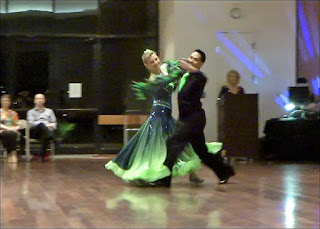 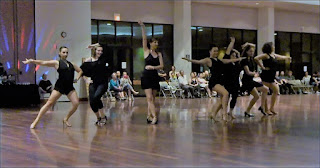 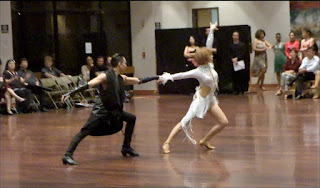 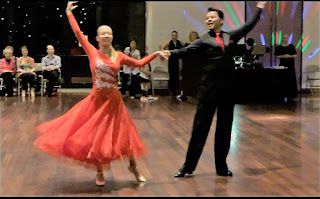 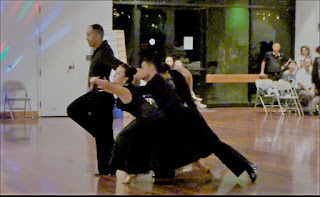 After the showcase of exhibition dance performance, there was a short break for general dancing.
The Latin dance competition started with a parade of the various dance clubs and schools participating in the competition.

The Latin dance competition commenced with the Cha Cha Cha first. There were eight dances in which the dancers were competing in. They were the Cha Cha Cha, Rumba, Samba, Bolero, Mambo, Paso Doble, Night Club 2 Step, and East Coast Swing.

Not everyone competed in all eight dances. The dancers chose which dances they wanted to compete in. However, it was a spectacular showcase of exhibition dancing, and competitive dancing. Colorful and electrifying and most of all it displayed the art of entertaining. Kudos to Gayle Kawahakui and her committee, and to all the participants in the dance exhibition and dance competition showcase.. 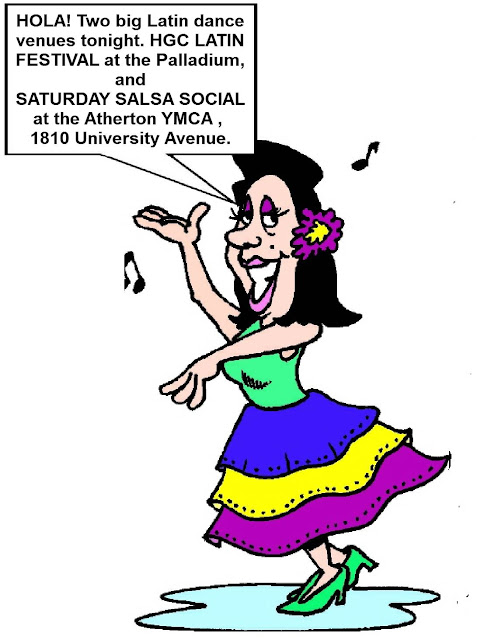 Hawaii Gardenia Circle LATIN FESTIVAL at the Palladium 6PM $10 at door (no refreshment). 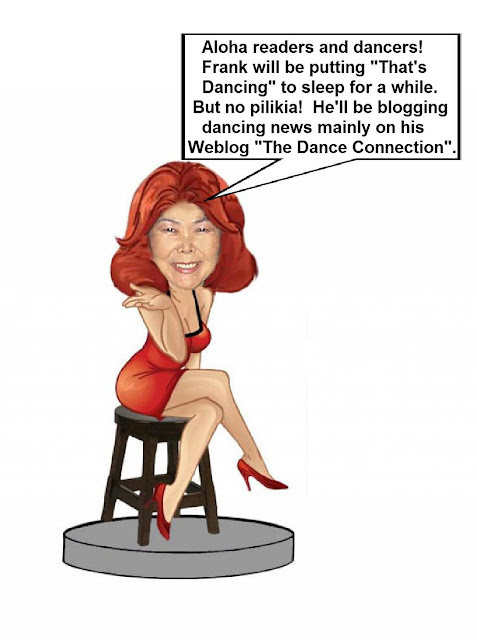 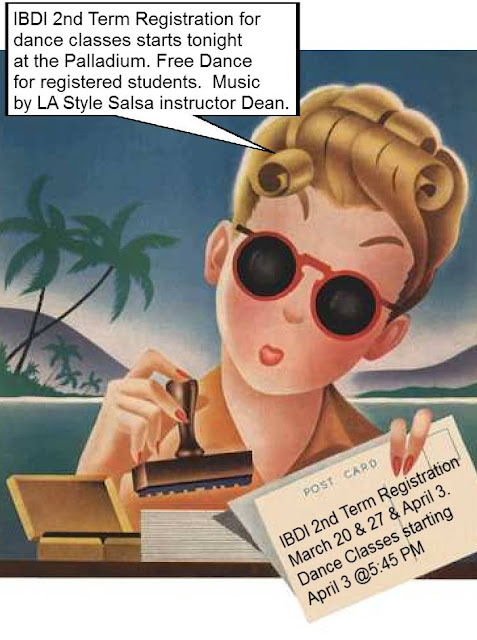 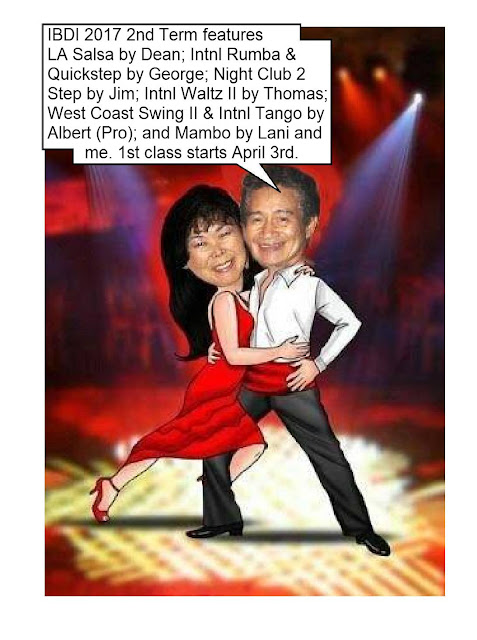 Monday, March 13 marked IBDI first student party of 2017 at the Palladium. Student Parties are held after each term to encourage the students to perform what they had learned during the past seven sessions. Lani and I got to the Palladium about 7 o'clock. Most of the students and instructors had already finished eating their pre-ordered bento and were already on the dance floor moving to the music of DeeJay George Suetsugu. After a while, it was time for the students to take the spotlight and demonstrate the dances they had learned. IBDI Prez Arnold Lee was the emcee for the evening. (You can see some videos of the student performances at the IBDI Face Book). As per tradition, there is always a break from dancing when it was time for door prizes. After that was done, then it was time for the instructors to demonstrate the dances they will be teaching during the 2nd term. 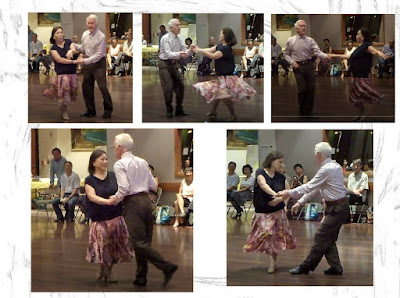 Lani and I demonstrated the Mambo but unfortunately we couldn't do a selfie. But you can view the video of us on the IBDI Face Book (ibdi clubhi). 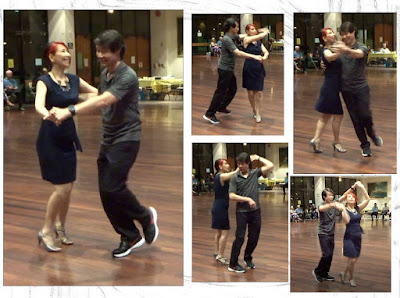 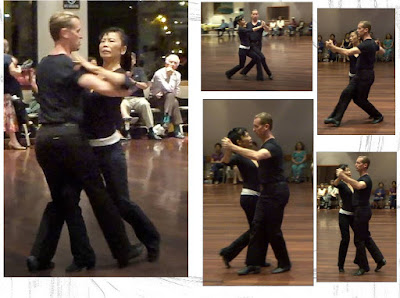 Social dancing continued till closing. Registration for the 2nd term is on March 20, 27, and April 3. There will be Free Dance on March 20 & 27 for students who register. 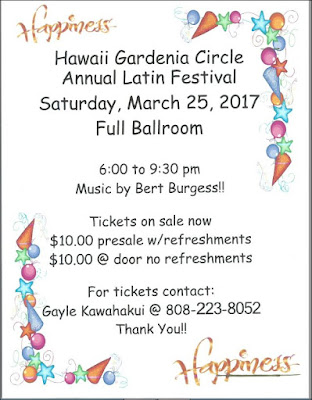 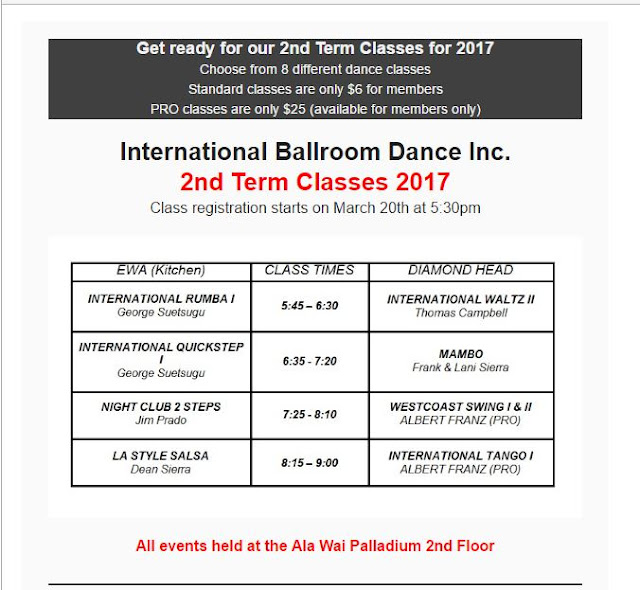 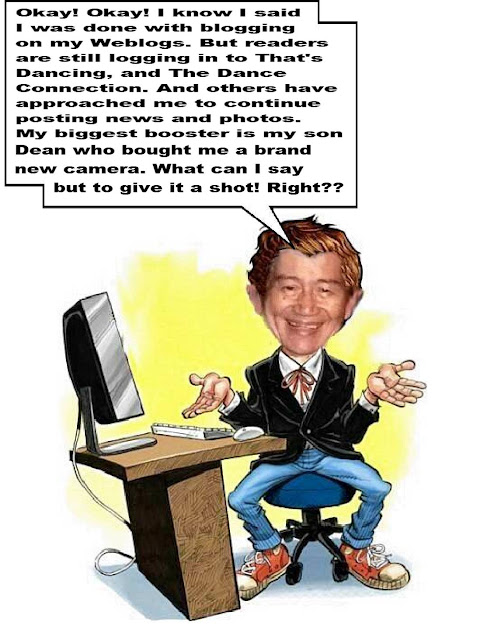