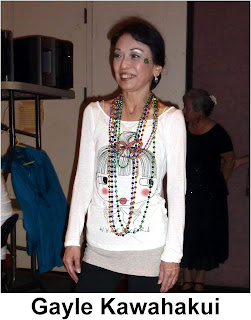 Another BLOCKBUSTER of a dance event at the Palladium this past Saturday hosted by the Hawaii Gardenia Circle. Credit goes to all HGC members who pitched in to make this a successful affair and a huge honor goes to Gayle Kawahakui for spearheading and organizing this BLOCKBUSTER. 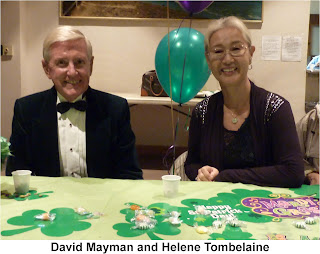 There were uku plenty dancers crowding around the Reception Table as Lani and I entered the ballroom. Some faces we recognized right away and among them were two smiling ones...1st VP David Mayman and Helene Tombelaine. Got our prepaid tickets as we entered the ballroom thanks to Gayle. 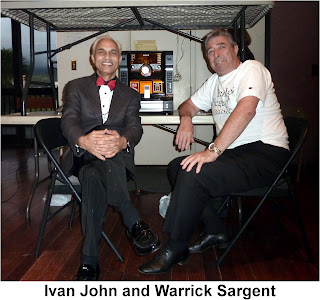 It was still a little early for the action to begin.....Only a few dancers were on the floor but the music was mellow and the audio system echoed the sound evenly around the entire Palladium ballroom. Monitoring the system and music were HGC Prez Ivan John and DeeJay Warrick Sargent (hope I got it spelled right or heads will roll...mine first..auwe!). 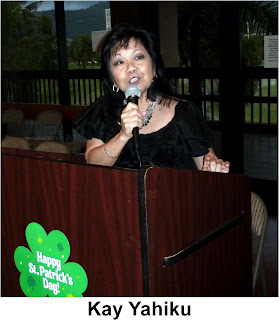 EmCee for the Latin Festival was that Lady Dynamo Kay Yahiku. She was an excellent pick for the job because of her vibrant personality and quick wit to keep the program running its course smoothly and on time. 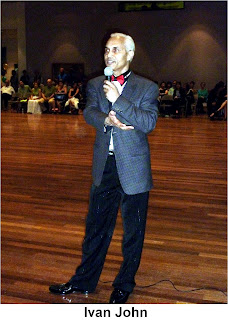 General dancing continued from just before 6 PM till 7:45 when Lady EmCee Kay introduced Prez Ivan John who gave a Welcome Message. He also introduced the two go-gethers who sold the most tickets...Annie Ferguson and Herbert Omizu. They both received honorable prizes from Gayle Kawahakui. 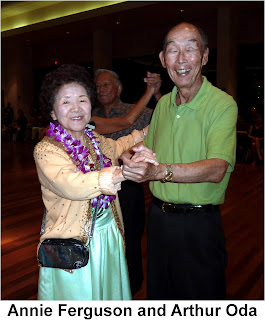 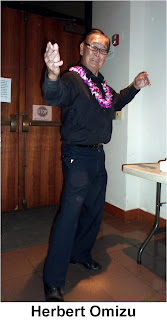 There was a WALTZ MIXER under the direction of Gayle (boy that gal sure gets around and with good reason,too). Anyway the "Mixer" drew more ladies to the dance floor than guys for the 10-minute duration. So you can see that the limited guys danced a whole lot. 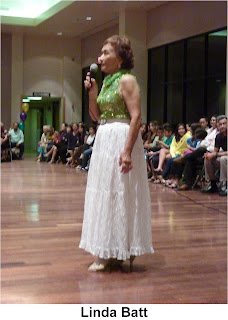 The Show Time opened at eight sharp with singer extraodinaire Linda Batt belting out the unforgettable Irish tune "Danny Boy". Excellent rendition of the song by a golden voice. A good fit for this showcase. 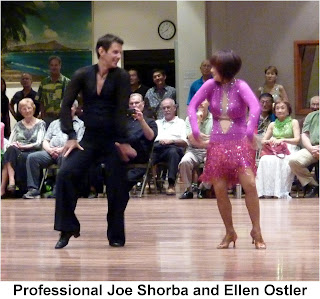 Now it was time for the Dance Exhibition part of the program. Professional Joe Shorba of Koko Head Dance Studio and partner Ellen Ostler danced a thrilling Cha Cha with lifts and a multitude of forms. It was playful and entertaining. 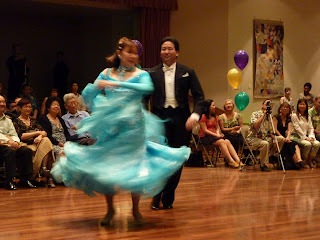 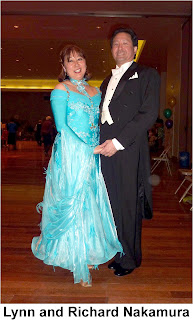 The Quickstep soon followed after the performance of the Cha Cha with Richard and Lynn Nakamura from Dance Magic 808. If any dance that is faster than the shutter button on my point and shoot camera it's gotta be the Quickstep as danced by Richard and Lynn. The performance of the dance was fast and furious with short pauses for those Charleston quickies. Very well done with fast footwork to covered the entire ballroom floor. 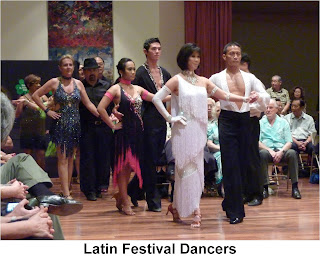 The Latin Festival Showcase concluded with a Samba Parade around the dance floor first so the audience could get a glimpse of the performing dancers. There were 20 participants dancing the Cha Cha, Mambo, Rumba, Jive, and the Samba. It was like watching a Dance Competition cuz every couple danced their own way and style. It was good to see the different moves of the three couples that ventured to the Diamond Head half of the ballroom (where Lani and I were sitting). Nearly all the other dancers huddled at the Ewa half of the ballroom. 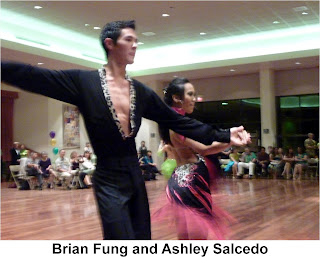 One couple that stood out and took advantage of the full ballroom floor, and was delightful to watch was Brian Fung and Ashley Salcedo. 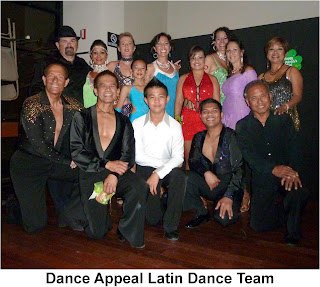 The Final Curtain Call for the Exhibition Dancers, and Singer to make their final bow came prettry fast....not the usual time that is allowed for picture taking. Fortunately, I was able to squeeze a photo shoot of the Dance Appeal Dancers. There was Nori Sushi for refreshment and general dancing continued till closing.
Posted by Frank at 6:42 PM 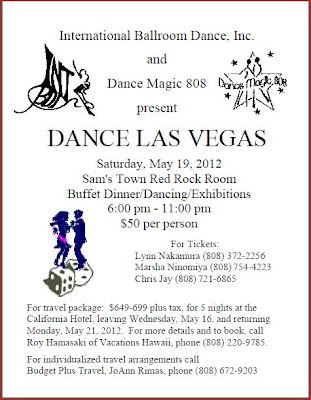 Last year, Lani and I attended the Las Vegas event for the first time and boy and did we have fun. It was billed as IBDI Las Vegas Extravaganza II at that time. This year Dance Magic 808 a new dance club that's not quite 1 year old has joined IBDI as host and sponsor for this annual event. Last year, guest performers were the University of Nevada Rebel Dance Sport Team that danced a dynamite medley of the Cha Cha, Rumba, Quickstep, Samba, and Swing. The Dance Now Team from Los Angeles also was terrific in the dance showcase with a medley of of the Quickstep, Jitterbug, and East Coast Swing. Some dancers of Dance Magic 808 teamed with IBDI in the fast paced Quickstep Formation, and IBDI dance instructors Sergio and Renna Villanueva wowed the crowd with a sizzling Cha Cha. You might want to check back to my May 2011 blog to paint some picture of what was in store. Any way, if you are planning to attend this years Las Vegas Extravaganza, please contact the people listed on the poster real soon. I heard closing date for Vacations Hawaii Travel Package is Saturday March 17. Call Roy Hamasaki to get on the "Package" list.
Posted by Frank at 9:20 AM 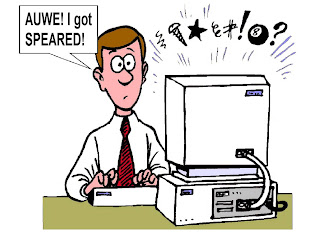 I know! I know! This isn't anything about dancing! But I gotta air this one out cuz no doubt some of you like myself have been receiving bogus e-mail from scammers. Anyway give an ear to a warning by a cyber-security expert on "Spear Phishing Fraud".............. 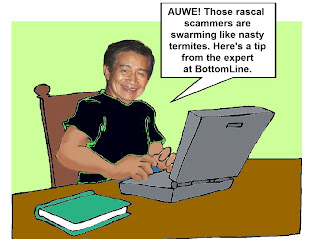 "Scammers craft very specific e-mails pretending to be from a person or business that you know. Clicking on a link in the e-mail can give the scammer access to your online accounts. Self defense: Let your pointer hover over a link in an e-mail. The status bar on the bottom of your Web page shows the link address. Be suspicious if you don't recognize it or if it doesn't end in .com or .org" writes Michael Gregg, president of Superior Solutions, a cyber-security consulting firm.
Posted by Frank at 11:36 PM