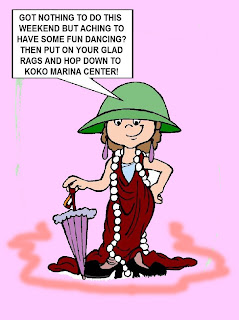 Alicia and John Aros, Certified Professional Dance Instructors of Star Struck Studios will be conducting dance classes in the Rumba from 5PM to 5:45PM, and the Mambo from 6PM to 6:45PM at the Koko Marina Courtyard this Friday December 4th. No experience needed, beginners encouraged to come for these free lessons. For more info please contact Alicia and John Aros at ph.395-0976.
Posted by Frank at 10:09 PM 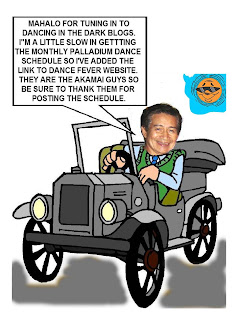 Looking to go dancing this weekend at the Palladium but out of luck in getting a dance schedule? Well, no hu hu! Just log in to www.dancefeveroahu.com or bettah yet click on the link on the right.
Posted by Frank at 12:26 AM

Talk To The Animals 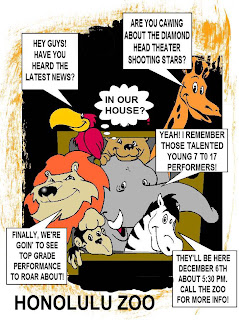 Okay, Students of Dance. If you go to the zoo and talk to the animals like Dr. Doolittle, they'll probably whisper, "Hele mai kua ko kakou Kekemapa eono."
Loosely translated "Come back to our house December 6). Guest Authors Ravi and Synthia have again got their fingers on the pulse of upcoming performances by the talented 7 to 17years young DHT Shooting Stars. If you have the succulent taste for Broadway musicals, this is one event you won't want to miss. Please check with the Honolulu Zoo for more info.
Posted by Frank at 3:19 PM

Aloha Students of Dance. There's another weekend event hosted by ContraDancers Hawaii. If you're in the mood for top spinning dancing with calls like the Square Dance or Circle Dance, you might want to check out this venue.

Your $7.00 donation will help cover costs. It is a good idea to bring water to drink, as there is no drinking fountain in the building.

NOTE TO NEWCOMERS: If you haven't danced before, get there early. The first part of the evening is especially good for getting a feel for what it's about. The caller will explain and teach all moves. Also, you can show up a few minutes before the dance begins, and the caller will be happy to give you a brief explanation and demonstration.
Posted by Frank at 1:00 AM 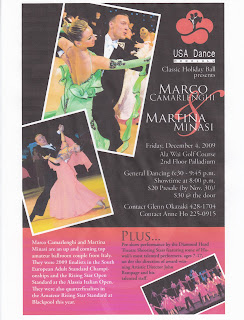 Aloha Students of Dance,
Just got this poster from Ravi and Synthia. For more info on the Showcase performers, please go to the Town Dancer blogsite. Calvin has a short bio on Marco Camarlenghi and Martina Minasi. Also for a pre-show performance, try to get there early for the Diamond Head Theater Shooting Stars.
(Left click mouse on graphic to zoom in)
Posted by Frank at 4:42 PM

Cruising The 3rd Week Of November

Aloha Students of Dance. I hope you were able to take in all those mellow news by Calvin, June, Maile, and of course da mysterious Specter on the links to this blogsite. I've been laying low for awhile but not too low that I'm out of touch. I gotta thank Ravi and Synthia for their contribution to the Dancing In The Dark blogsite on The Festival of Lights, and the upcoming Diamond Head Theater Christmas With Jim Nabors. They are pretty much connected with the Diamond Head Theater Shooting Stars, the USA Dance Organization, and the Lotus dancers. So stay tuned for more happening from them.

This past Sunday, Lani and I cruised over to Radford HS to observe the Dance Aliamanu Showcase practice choreographed by Andy and Monica. We were invited to participate with the eight couples but with such a short time to pick up the routine before the big event, we had to decline. However, it is a captivating medley and one to watch and enjoy come January 15. 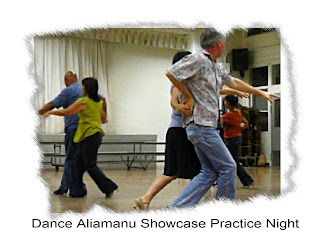 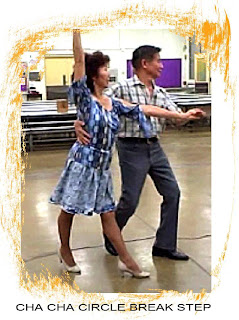 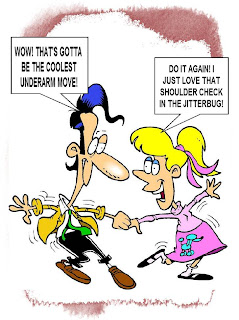 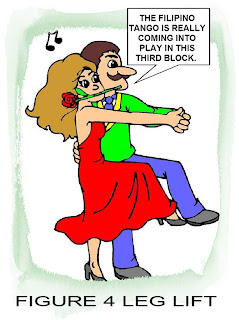 Tuesday night is when Lani and I become students of Andy and Monica in the Filipino Tango. This was our 4th lesson and we were very eager to learn the Grapevine pattern that Andy and Monica had demonstrated last week. New students had shown up on this
4th week of lesson. I think it was a blessing, too, because everyone was in favor of going over the patterns in Block 2, and 3.
The Fiqure 4 leg lift, the two cross hands underarm turns became much clearer and danceable. As we progressed into the Grapevine pattern, the Filipino Tango became easier to dance with music.

The winds were pretty strong Wednesday evening as Lani and I headed for Kaiser CSA for our Foxtrot and Tango class but it was much cooler than the Wednesday before. I guess I got into the Grapevine fever from the evening before. So Lani and I taught the Grapevine pattern in the Foxtrot before reviewing some of the other patterns. The students were really into it and started to form their own combination of patterns. This was the goal that Lani and I had set for our students and it was coming into play.
Since our students were dancing the Grapevine with other patterns so well, the Grapevine fever hit me once more. What's good for the Foxtrot has gotta be good for the Tango, I thought. So Lani and I taught the Grapevine pattern in the Tango and it worked out very well with the students. (Info: The American Tango Grapevine pattern is not the same as the Filipino Tango Grapevine).
That's a wrap for now.
Posted by Frank at 11:30 PM

Being A Weight Watcher In Da Jitterbug 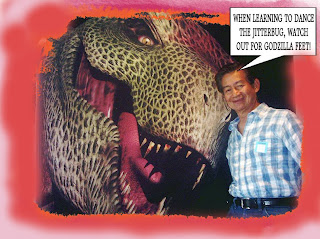 Aloha Students of Dance! It's no big secret that you gotta Watch Your Weight no matter what style of dance you're learning. So for the moment, let's talk JITTERBUG...the one that Dr. J calls it America's coolest dance. Dr. J mentions five secrets of Jitterbug success but for now let's leave the secrets where they belong....to Victoria. Here's his pitch on my top of the chart Swing Dancing.
"One thing you've got to be aware of while learning to dance is where your weight is. I don't mean the effects of a diet, or where you stashed your barbells. I mean which foot you're putting your weight on. Be conscious of where your weight is supposed to be, and how it changes from step to step. Dance is a smooth motion, and your steps should be smooth and light. If your weight is placed incorrectly, your whole body will be out of position. You won't be in place for the next step, and the move won't work. Plus, you'll throw your partner off." AUWE!
Here's two simple rules he sez to remember: "(1)When stepping, always put your weight on the leading foot (the one you've stepped with), and (2)Watch out for Godzilla Feet. Stepping is not an invitation to imitate Godzilla, stomping around the dance floor like a 40-ton prehistoric monster. When you change weight, don't plunk your feet down as if they were made of lead. Keep your weight in the front, on the balls of your feet."
Mighty good tips from Dr. J on being a Weight Watcher. He adds: The only one reason to learn Jitterbug....TO HAVE FUN!
Dat's a wrap for now. (Photo: Da big guy with sharp teeth is from Dinosaurs Unearthed Exhibit at the Bishop Museum).
Posted by Frank at 1:28 PM

Getting Stuck On Filipino Tango 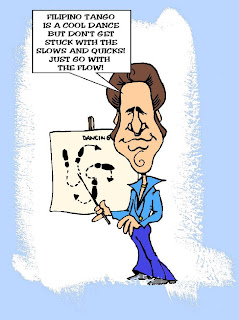 Aloha Students of Dance. Well another Tuesday rolled by and Lani and I are back at Dance Aliamanu getting our second taste of the Filipino Tango with Andy and Monica. There were a lot more students tonight than last week. And it was a good thing there were new faces in the crowd 'cause it meant that Andy and Monica had to review the first block of patterns for the new ones as well as for us and those who needed the brush up. After several reps on Block One, our instructors demonstrated variations of how we could sweeten the dance moves with continuous girl underarm turns or spot turns. Nice for the guys but could make the girls dizzy after awhile if they are not use to spinning. The patterns in Block Two was fun to dance. Leg lifts in figure four form and a rapid turn to Crossover Break ending with Spot Turn was a snap, thanks to Andy and Monica's well defined instructions and demonstrations. With the music playing, it was much easier to dance the patterns of both Blocks One and Two the length of the song. As Andy had hinted to the students, musicality was the key to dancing smoothly the Filipino Tango...... just hang loose and let the music dictate the moves.
Posted by Frank at 10:48 AM 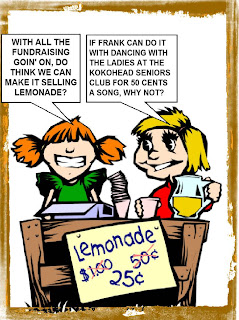 Okay, Students of Dance, all kidding aside. Fundraising for a good cause but it's not a new idea. For dancing events?....maybe it's new. Last week it was USADance who issued a challenge to other dance clubs to get on the bandwagon to help the victims of natural disasters in the Philippines, Indonesia, and Samoa through fundraising. (I'm hoping one of the Guest Authors for DnD will share the experience of that event with us). This weekend, HBDA is hosting a fundraiser at the Palladium for the same cause. Should be a fun night of dancing and a Costume Contest to boot. HBDA's Masquerade Ball has always been a crowd pleaser in the past and should continue to be so this Saturday. The kids had fun this Halloween dressed up in their favorite hero's costume. Now it's the grownups' turn to go Treat-Spooking without the Tricks. For more info, scoot over to June's announcement on the Dance West Oahu and Town Dance blogsites.
Posted by Frank at 1:39 PM