Just musing, again! My photo archive has got so many memories of the fun days performing with friends for the Masquerade Ball that I'm gonna share this last one with you before all the big events that's scheduled for the "spook" month of October comes about. Okay, we're back in the 80's and the "think tank" at Hawaii Kai Chapter figured that it's time to go to the edge to present another entertaining number for the Masquerade Ball. The "Evolution of Rock" in 1982 was the first and most innovative performance presented by our Chapter. It featured the Charleston of the 1920s choreographed by Lani, a Comical Hula choreographed by Roy Nakamura, the Rock & Roll choreographed by Bob Furukido, and the Popping by Frank. That year, the "think tank" thought a "Comical Ballet" number would garner tear jerking laughters from the audience. Well, it sure did especially for the ballerinas..with a whole bunch of whistles and applause, too, that echoed throughout the ballroom. "Comical Ballet" performed to the tune "Mid Summer Night's Dream" was an entertaining success and much credit goes to choreographer (former) Darleen Yap. Performers were (ballerinas) George & Jean Ogata, and Harold Kim, (ballet dancer) Gil Ammons, (ballet prince) Lani, and (supporting cast) Christy Ammons, MaryAnn Yokoyama, and (unknown cast member). Dat's da musing fo' now.       ﻿

Hit movies like CHORUS LINE, FOOT LOOSE, STAYING ALIVE, and FLASH DANCE were inspirational for our Hawaii Kai Chapter. We had already done EVOLUTION of ROCK in the '82 Masquerade Ball. There were 15 members who were young then with an enormous amount of "go energy". The "think tank" in the group came up with "how about doing a Jazz dance this time for the Masquerade Ball?" No opposition to the idea. Everyone was in favor of the idea. Fortunately, someone in our Chapter knew a Jazz dance teacher (Salome Sato). It was the year 1983 and so far nearly every other Chapter performed a skit at the annual HBDA Masquerade Ball for prize money. The Hawaii Kai Chapter wanted to be innovative again and do something that had never been done before. We were fortunate to have Salome Sato, an energetic Jazz dance teacher to choreograph "Flash Dance" for us. We practiced  3 to 4 times a week and must have performed well at the Masquerade Ball because we were invited to perform "Flash Dance" at the Chinese Chamber Mandarin Ball, and at the Wheeler Army Officers Club that year. 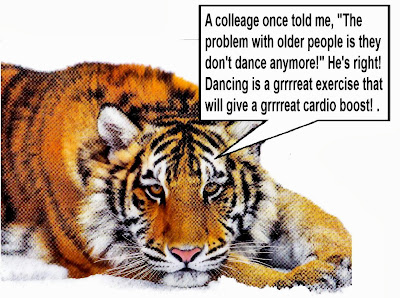 Excerpts from the AARP Bulletin/Real Possibilities by Margery D. Rosen who is a freelance writer specializing in health and psychology. "Dancing is fun and something most people can do. Besides giving you a great cardio boost, dance strengthen the bones, works all the major muscle groups, builds stamina and improves balance, coordination and flexibility. Also, if you learn new steps and dance with a partner, you banish loneliness and ramp up brain power by combining two other key elements of brain health: learning new things and socializing. Feeling rusty? Check out the dance classes offered at your YMCA or senior center (or at the Palladium); you may be surprised at the variety. Learning new moves, or refreshing old ones, challenges your brain and builds new connections".

It was for the HBDA Masquerade Ball 1982 that Hawaii Kai Chapter officers and members decided to showcase an entertaining performance instead of the usual ballroom dancing and skits that was seen year after year. Entertainment was our goal! Rewind to a few months before the Masquerade Ball. Lani and I vacationed at DisneyLand and saw the musical show dubbed "Evolution of Rock".  It was a colorful showcase of dancers and live band going from the early form of dancing to the Rock & Roll Era. The show was so awesome that Lani and I brought the idea back to our Hawaii Kai Chapter. It was accepted with enthusiasm to the max. The groundwork was set but we wanted to have our own identity instead of following a DisneyLand concept. As I remember, this was the first time we performed without the guidance of a Rotating Instructor. It was hard work but fun (even when I had my face painted white during dress rehearsal), and although we sought to do the dances well, the goal was still to provide entertainment. On the agenda we had dancers doing the Waltz, Comical Hula, Rock & Roll, Disco, Bebop, Charleston, and Popping. The costumes that the dancers wore were colorful and complimented the style of dance. It went over big time that night with lots of applause, whistles, approval shouting, and especially laughter for the three popping dancers.  I think Hawaii Kai Chapter changed the landscape for the Masquerade Ball showcase that night in 1982. We had reached the goal to entertain and that was  "mission accomplished".
Dat's all fo' now. 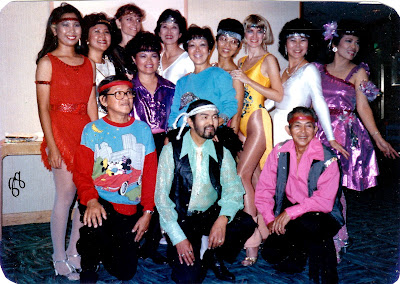 I was going through my photo archive to delete some photos that's been sitting and collecting dust (so to speak). Then I came across this photo taken in 1988 and sparked my main squeeze Lani in it with the Rock 'N' Roll dancers. This was one of three exhibitions that I did not appear dancing with Lani. (The other two were the Hula for HBDA, and the Hip Hop for another dance organization). It's been many many moons since I laid eyes on this photo and that got me musing once more.

It was the vintage year 1988 when HBDA introduced Rock 'N' Roll in their curriculum as a pilot program. It served as a prelude to showcasing a Rock 'N' Roll dance exhibition in their 29th Anniversary Ball. The special performance was dubbed "A Rock 'N' Roll Escapade"  and was choreographed by the late Evelyn Cummings who was a talented HBDA Rotating Instructor. Quoting from an article by Sim Redona, "this action packed special is composed of hard core Rock 'N' Rollers...ten sexy chicks and only three foxy dudes...Gutsy Thirteen!...assembled from Ala Wai, Kaimuki, and Hawaii Kai Chapters". Lets see if my memory serves me well. The guys were Calvin, Joe, and Jerry. The gals were Terri, Jane, Francine, Faye, Kathy, Diane, Ann, Yvonne, Patsy, and Lani. Okay fast forward to 2013. Twenty five years has gone by since "A Rock 'N' Roll Escapade" wowed the audience at the anniversary ball but I gotta say that I've seen some of those dancers in the photo frequent the Palladium and they are still in Grade A shape and dancing with vigor. Goes to show that "dancing is good for you. It keeps you young and healthy".  (Left click on photo to zoom in).