The Singer, The Hula Dancers, and The Lion 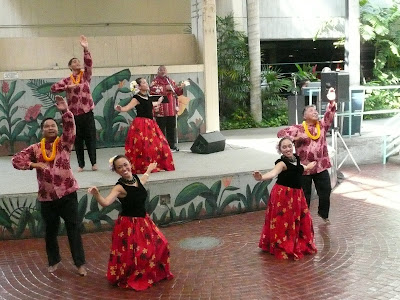 Kine da bit early for your weekly blog, eh Frank? No huhu, guys and gals! I didn't want to wait and then put you to sleep with long winded talks....just the facts..the way they use to say in "Dragnet". Got word from Maui that my nephew Darren was going to dance the hula at the Victoria Ward Warehouse stage on Sunday. 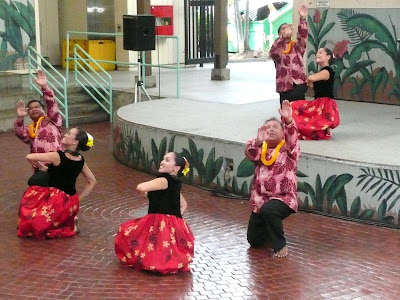 Sure 'nuff he was there (Darren far right in photo) with five lovely ladies and two other guy dancers, and Uluwehi Guerrero (the man with the golden voice) who sang all the Hawaiian tunes and a Japanese song, too. The hula dancers (the guys included) were from Halau Hula Kauluokala. Their hands and body movements were like the palm trees being swayed by the gentle flow of the wind. Okay you know what I mean.
Uluwehi told a short story about his experience in Japan while on tour with the hula troupe. Besides his extraordinary singing, it kept the audience glued to his every word. It was amusing as he told how he had composed the Japanese song that he was about to sing. It was showtime again and sing he did, strumming his rich tone ukulele as the lovely hula dancers in green danced with grace.

It was only a one hour show but it had class and certainly entertainment.

Night came but the sky was lighted with orange hue as Lani and I headed for the Kapiolani Lions Ballroom Dancers shindig at the Palladium. Small crowd but very friendly dancers. Okay, don't go looking for the Lion. This is it!
We were welcomed by Walter, Kay, and Ruby at the reception desk. 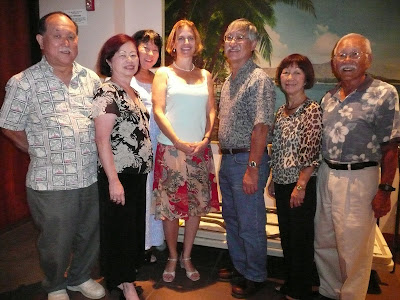 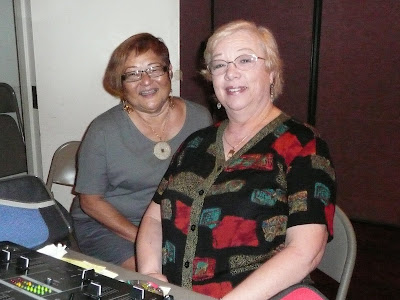 It was good to see Margie Liu and Peggy Freeman who were the DJ's for the evening.
Good tempo music for dancing although the volume could have gone a few decibal higher which it did before the snack break. Sweet and ono snacks were donated by Arthur and Joan Oda of the New Aala Bakery. 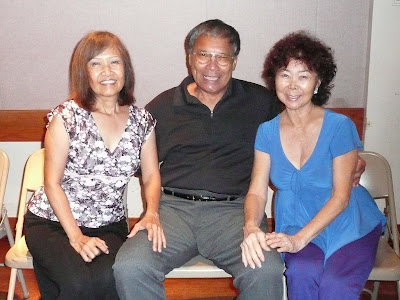 Exchanged dances with Susan and Richard who Lani and I sat next to.
It was a rare opportunity for the Kapiolani Lions Ballroom Dancers to host a dance at the Palladium. Hopefully they can persuade the Mayor to give them a spot at the Palladium maybe once a month. Anyway, if you're ever in Central Oahu, check out Richard and Ruby's dance classes at the Waiau Rec Center.
Posted by Frank at 12:12 AM