Billed as an Anniversary Dance and a fund raiser for the Japan Disaster, the event drew at least 400 plus dancers to this Saturday night event. The donations were piling up as Lani and I entered the Ballroom. The money-caretakers were James, Mae, and Isabel and they did a wonderful job at the donation table. The music was very good,

the DeeJays kept the social dancers on the floor with a combination of International and American flavor music.

The EmCee (Roger Izumigawa) kept the show on a lively beat. The showcase was lined with explosive dancers. The ladies in the exhibition dances were beautiful and beautifully dressed in an array of spectecular colors. The refreshments were light but ono ono, and the people were on a friendly mood. So what could go wrong at this successful event? Well...my worse nightmare that befalls any photo blogger at least once and when least expected. My trusty workhorse camera finally threw in the towel and gave up. Yeah, in boxing terms, it was a knockout. AUWE! So all the shots went down the drain. Luckily for me, the gal who inspired me to dance the Merengue in a showcase, Marsha Ninomiya, was snapping away with her trusty camera and is willing to share the photo of Ed and Candy Matsuda for my blog. Mucho gracias, Marsha. (Except for the Matsudas, Ravi and Synthia, and EmCee Roger, other photos have been substituted for recognition of the showcase performers).

Presidents and members of the various dance clubs in Honolulu were in numbers to support this event. That also included the professionals from the local dance studios. The dance floor was heated up with social dancers before the exhibition part of the program. There were seat warmers, also, but the call for a Horseshoe icebreaker dance got nearly all of them to the dance floor with the encouragement of the EmCee and Isabel. Honors went to the most tickets sold sellers Herbert Omizo and Annie Furgerson. These two are genuine supporters and go-getters for all dance clubs' events. Recognitions and congrats were also given for the four award winning couples that performed at the Baltimore Dancesport Championship...Glenn Okazaki & Ann Ho, Calvin & Debra Ota, Jackson Cho & June Choong, and Candido & Yvonne Jorge-Cuan. (See previous blog) . 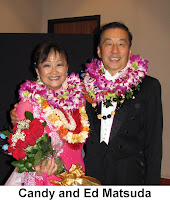 The Showcase of Exhibition Dancers started soon after the Horseshoe dance. First at the gate were Ed and Candy Matsuda. They performed an exquisite International Waltz as though they were dancing on clouds. Very smooth and very well performed. 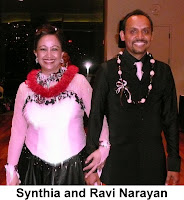 My two former students, Ravi and Synthia Narayan, who honor Lani and me as their first dance teachers and as their guests came on next with the International Quickstep. This was their first appearance in showcase dancing at the Palladium after performing at the Pacific Beach for Sugino Dance Studio. They started with a bang and ended with a bang. Fast feet with good control, Ravi and Synthia danced the entire ballroom floor. It was refreshing to see this new young couple performing and whizzing like a flash on their first try. 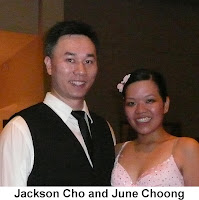 Jackson Cho and June Choong thrilled the audience with their explosive International Cha Cha. Fresh back from the Baltimore Dancesport Championship, Jackson and June were magnificent in this exciting dance. 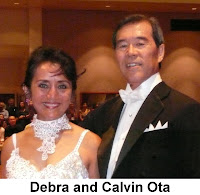 The International Rumba performed by Calvin and Debra Ota was captivating and sensuous to the bone. It was silky smooth and every movement was well orchestrated. It was beauty in motion and a love dance that will be long remembered.. 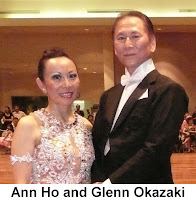 Concluding the program were crowd pleaser Glenn Okazaki and Ann Ho dancing the International Slow Foxtrot. This was another refreshing performance because it's rarely that a slow foxtrot is ever performed. It was wonderfully done with precision and grace. It's no wonder Glenn and Ann are considered tops in the exhibition and competitive level. It was an exhilarating and an enjoyable perfomance to watch.

It was close to 9:15 and yours truly had just about expanded all his energy with my main squeeze, and some lady friends. It was an enjoyable night of dancing and socializing with good friends but it was time to call it a good night and head for the ride home.
Posted by Frank at 12:26 AM