Seems as though its been many moons since I last got into my dancing shoes and enjoyed an evening of good fun dancing at the Palladium or anywhere else. And that's not counting the good times Lani and I have teaching the American style Rumba for IBDI. No kidding....my dancing feet were iching to burn the floor this weekend at the Valentine Ball at the Palladium. Okay....Lani had the ichy feet too. We had purchased presale tickets earlier for 10 bucks each. That paid for admission to the ballroom and generous serving of bento. 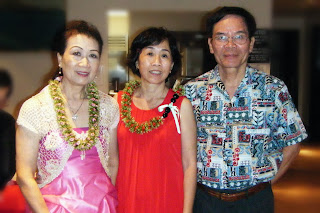 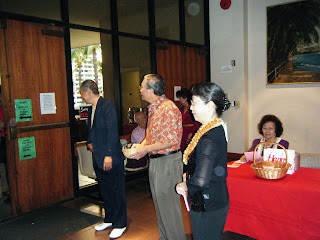 Got to the Palladium about 5PM and some of the early dancers were already savoring their bento dishes. As we entered the ballroom, we were greeted by friendly faces with a welcome. It was too early for social dancing since the exhibition dancers were practicing their routine. 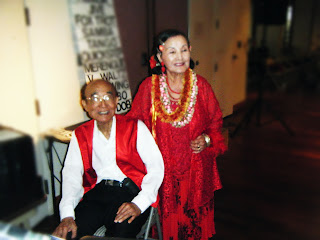 DeeJays for the evening event were Tad Fukumoto and Sara Oyama. They played a variety of good flavored American and International tempo music. 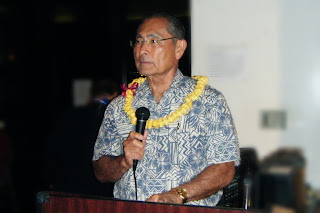 EmCee for the program was Roger Izumigawa.....you know the guy with the dynamic voice. He had the program rolling along smoothly. 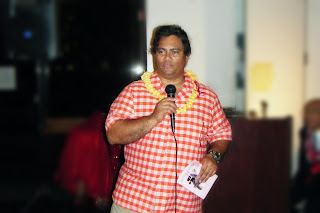 A Welcome Message was given by Steven Santiago, Senior Citizen Specialist for the City & County of Honolulu Parks and Recreation Department. 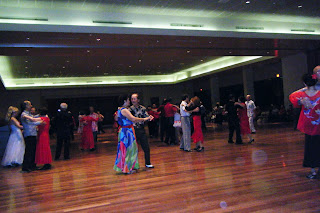 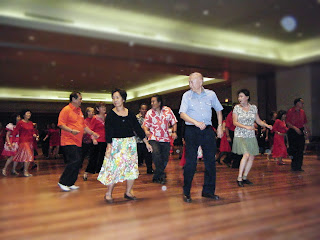 It was time to get the audience involved in the program. Sara Oyama was called to lead the Dance Mixer (commonly known as the Horseshoe Dance). There were twice as many ladies than guys lined up for the Waltz. Gotta give credit to the guys since they worked twice as hard. But for sure it must have made a lot of ladies who came without partners very happy. So much KUDOs, guys. And the happiness didn't stop there. The Electric Slide brought more dancers on the dance floor. Gotta say that there were no seat warmers that night. It was good to see the presidents and representatives of the various ballroom dance clubs on Oahu in attendance.....and that including the owners of professional dance studios. EmCee Roger named everyone as each one was recognized. 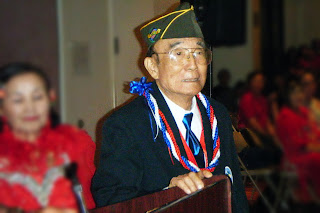 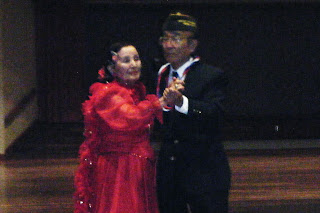 It was time for the Exhibition Dancers to perform. But EmCee Roger had a surprise announcement to make which was an honorable one to recognize Tad Fukumoto as a member of the famed 442 Regimental Combat Team of World War II that received the highest USA award...the Congressional Medal of Honor. After a huge applause, Tad and dance partner Sara treated the audience to an exhibition of the International Tango. 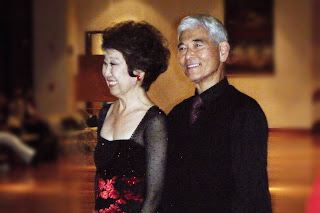 The TANGO International Style was performed by Dr. Michael Uechi and Trudy Uechi. 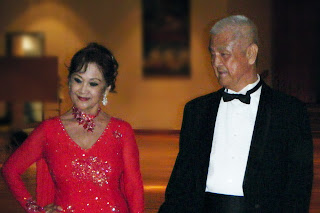 The WALTZ and TANGO MEDLEY was performed by Sidney Chiu and Patricia Paliracio. 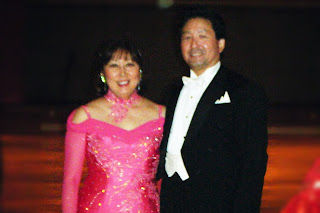 The QUICKSTEP was performed by Richard and Lynn Nakamura. 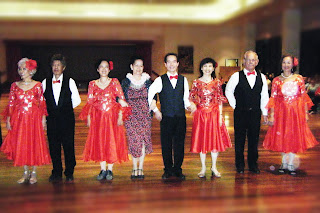 Concluding the Exhibition Dancing of the Program was a Formation Dance of the INTERNATIONAL WALTZ by HBDA dancers Joe & Ann Ramelb, Paul Chan & Quin Zhaung, Paul Ta & Jennifer Lin, and Bill & Gloria Klein. The dance was coordinated by Albert Lui and Shu Wong.

After honoring all the performers in the dance exhibition, lucky ticket numbers were called for door prizes. In tune with the Valentine spirit, heart-shape boxes of candies were issued to the lucky ticket holders.

Refreshments were served during the break at 8:45 and the last dance at 9:45 ended the 2013 Valentine Ball.