﻿
Kessler and Company Presents Broadway Revival played at the Pacific Beach Hotel Grand Ballroom last Friday and what a show it was featuring Mr. Kessler's students, students from the Koko Head Dance Studio, a couple from Dream To Dance Studio, and a couple from the Hawaii Gardenia Circle dance organization. Only two professional dance teachers graced this Revival.....Mr. Kessler, and Joe Shorba. It was a fresh treat to watch performances done by dancers at the amateur level. Lani and I had heard through the grapevine that Mr. Kessler always puts on very entertaining showcases. So this was our first time at Mr. Kessler's dinner, dance, and showcase. 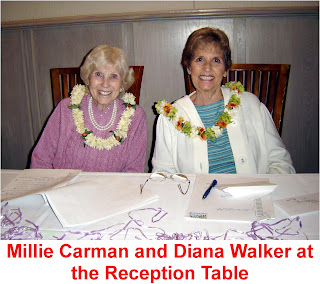 Lani and I got to the Pacific Beach Hotel about 5:30PM. The Grand Ballroom doors were already open and sitted at the Reception Table to welcome guests were the mother and daughter team of Millie and Diana.
﻿
﻿
﻿
﻿ 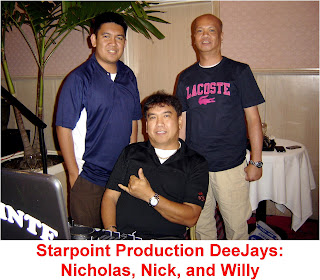 ﻿A few dancers were already on the dance floor as we entered the ballroom.  As usual, my main squeeze couldn't let a good Rumba music go by without us getting into the mix. After the Rumba more sweet and mellow music echoed throughout the ballroom played by DeeJays Nicholas, Nick, and Willy from Starpoint Productions. My girl was in the mood and I felt that it was gonna be another weekend of Dance My A** Off. 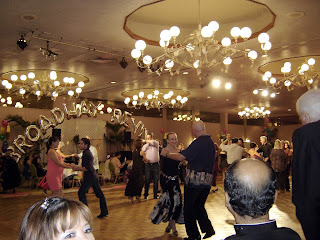 The ballroom was beautifully decorated with a rainbow like arch of the event's theme "Broadway Revival" hovering over the centerstage. Each of the tables had strings of colorful balloons anchoring a large star shape mylar balloon as a centerpiece.. 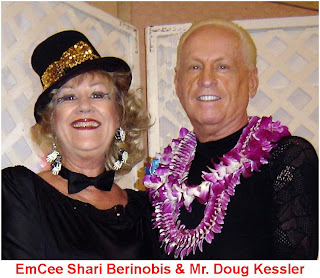 Lady EmCee was Shari Berinobis, a gal with a delightful personality who kept the program and nonprogram part of the Revival running smoothly and on track. She also said the invocation before the buffet
and also handled the calling of lucky ticket numbers for door prizes. 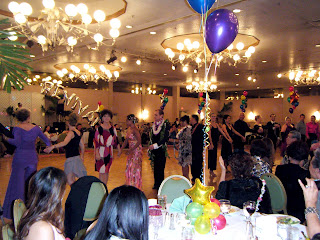 There were three Acts in the Broadway Revival Showcase and before the first Act started, EmCee Shari called all the performers to the dance floor. All nineteen performers paraded around the perimeter of the ballroom floor......what a colorful and impressive sight!
ACT ONE.
.

Trophy Awards were presented to the participants of the Broadway Revival Showcase at the conclusion of the program. 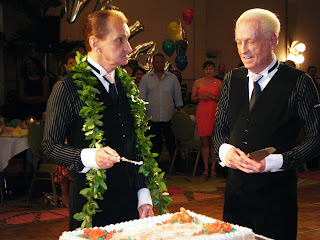 Then a large cake was wheeled onto the dance floor to celebrate Robert's birthday, and the anniversary for Robert and Mr. Kesler.

General dancing continued on but the Electric Slide brought even more dancers onto the hardwood floor. Then the Korean Gingham Line Dance followed that kept most of the line dancers on the floor.

More general dancing continued on but for two senior teenagers, it was time for Lani and me to leave the fantasyland of Broadway and the wonderful and very entertaining showcase. One thing fo' sure, we enjoyed every bit of the Broadway Revival Showcase, the fantastic performing dancers, and the Broadway musical scores. Mr. Kessler's "MASQUERADE BALL" will be on October 25 and it's one that we won't miss.