WOW! It's been many moons since I last submitted an article to be published in Joe Martel's mini-dance magazine called "Dancing In The Dark". Yeah! that was a spell back in the late 90's and early 2000's. But at a recent dance at the Palladium, a DeeJay asked me "What's the difference between the American Style and International Style of dancing?" He said that he had read my article on that subject in the mini-magazine. Nice to know that the treasured mini-mag is still hanging around and still have some useful info for those who want to know the  difference between the International Style and American Style of dancing. For those who are interested in the difference, here's Dance Vision's answer as written in their FAQ 2005: 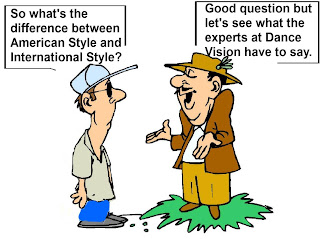 The American style is most popular in the United States, whereas the International style, which is also known as the English style, is danced throughout the rest of the world. The American Style Smooth dances, Waltz, Foxtrot, Tango, and Viennese Waltz, experience more freedom and expression. They may be danced in closed or open position, allowing for additional innovative tricks and creative arm and hand styling. The International Style Standard Waltz, Foxtrot, Tango, Quickstep, and Viennese Waltz are danced only in closed position. The technique for both styles is similar. The American Style Rhythm dances, which are Cha Cha, Rumba, Swing, Samba, Mambo, Bolero,and Merengue, have a greater variety of patterns, and are more suited for social dancing. The International Style Latin Cha Cha, Rumba, Samba, Paso Doble, and Jive are more disciplined and technical. The technique is different between the styles and changes throughout the years. American Style dancing has always been more popular for social dancing in the United States.

So there you have it from an authority who's Teaching The World To Dance. And technique have changed throughout the years. I think Pepe (Joe Martel) hit da nail on da head when he coined the phrase "fusion dancing" some years back in his Weblog. I noticed that "Dancing With The Stars" and "So You Think You Can Dance" no longer uses the term American Style and International Style in their TV shows. It's just Foxtrot or Waltz or Tango, or  Rumba or Cha Cha, etc. (except when a country's name is hooked on like Argentine Tango and Viennese Waltz).  I think the fusion of the two styles  have brought more excitement with dynamic moves, and entertainment with sparkles and power in the showcases. But then, I'm just musing.
Posted by Frank at 12:25 PM