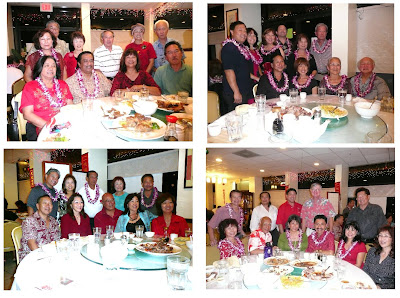 This past Tuesday night Dance Aliamanu honored their dance instructors with a 7-course Christmas dinner at the Imperial Chinese Restaurant at Pearlridge. Along with Dance Aliamanu President Maurice Morita and lovely wife Gilda, there were about 41 in attendance. Not all of them instructors but well wishers for another successful year for this growing dance organization. In less than a year, Dance Aliamanu has stretched out from its homebase in the Salt Lake area to Kaneohe (Kapunahala Elementary), Honolulu (Washington Middle), and Hawaii Kai (Koko Head Elementary).

Lani and I are new to this organization knowing only a handful of instructors from our stint with HBDA. But we sat at a table where we got acquainted with some new faces (Larry & Candace, and Eddie & Wally, and Jim B.), and Maurice & Gilda, and Andy & Monica Pascua.

After dinner (which incidently was so delicious that there was nothing left on our table to doggy bag and take home), and when everyone was settled, Maurice gave a short speech on the direction Dance Aliamanu was headed into the new year.

He then introduced all the dance instructors and thanked them for volunteering their time for past services and for being there in the coming year. He also recognized our music DJs Michael Chinnen and Andy Pascua, and Derrick and Kieko for designing the instructors' shirts.

Stan and Maurice were the photographers last night. I was the elusive paparazzo snapping away with my little digital cam at anyone that talks and breaths as I went table-hopping meeting new faces. It was a good night for getting together with the other instructors, also.

Dance Hawaii Kai opens with the two dances that draw the most dancers to the hardwood floor; the Waltz and the Rumba on Tuesday January 12, 2010, 7PM at Koko Head Elementary School. More on this later.
(left click on photo to zoom in)
Posted by Frank at 8:31 PM