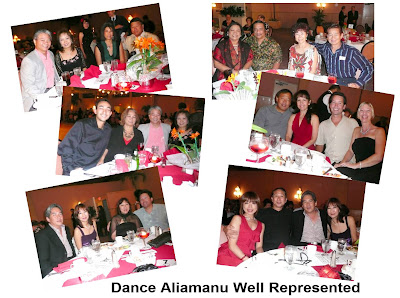 I guess many of those who bought tickets to this past Saturday IBDI Inaugural Ball at the Pacific Beach Hotel were in suspense whether the Tsunami was going to hit Waikiki or not. Well Lani and I waited till 3PM for the alert to fade away which it finally did. We headed to the Pacific Beach Hotel early...got there about 5PM. A little early. No one was at the Reception Table, so we went moseying down to the shops to kill some time. Found a shop selling things at reduced price because it was going out of business and Lani wanted to try out her bargaining skills that she acquired on our trips to China. Yep! she got what she wanted at the price she bargained with the proprietor. 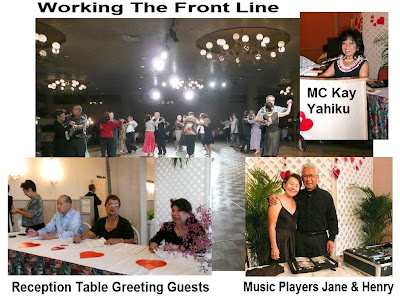 By the time we got to the Ballroom on the 7th floor, the lobby was filled with dancers. The "front line" reception table friendly workers were already busy collecting tickets and directing the dancers to their assigned tables. It was nice to see Dana Morey who with her late husband were students of Lani and me. Our first stop in the Ballroom was to wish our friends Calvin and Debra Ota the very best in the Paso Doble exhibition. 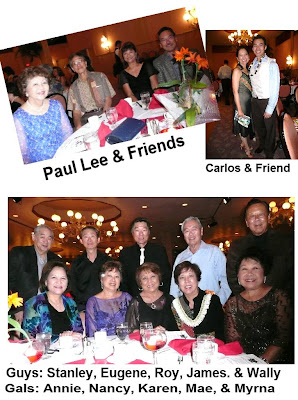 There were many dancers in attendance who Lani and I knew from way back when we were teaching for IBDC (now IBDI). General dancing was in full swing to the enticing music from the collections of Henry Lee with the assistance of Jane......not only International tempo music but a good number of American tempo also. General dancing went on for about an hour before the first wave of dancers were ushered to the buffet line. Emcee for the evening was Kay Yahiku who handled the podium with humor and a big voice. Renna Villanueva gave the invocation....then it was dinner time. (No need to hash over the buffet menu 'cause anyone who has attended functions at the PBH knows the entries are ono ono). 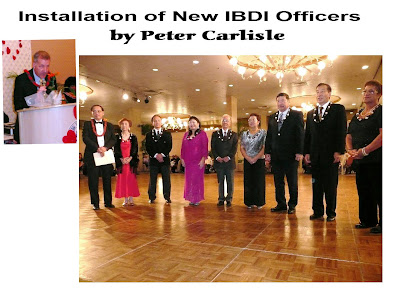 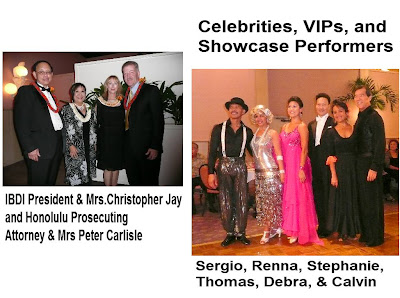 After dinner, the IBDI new officers for 2010 were introduced, and then installed by Honolulu Prosecuting Attorney Peter Carlisle. Here's the line up: President: Christopher Jay, 1st VP: Grace Nohara, 2nd VP: Steven Sambrano, Secretary: Marsha Ninomiya, and Treasurer: Paul Araki. Board of Diectors: Shirley Igarashi, Arnold Lee, Edward Matsuda, Dana Morey, Anna Omizo, and Fred Tsuda. A President's Message by Christopher Jay followed and then a VIP dance and a SnowBall (aka Ice Breaker) before the Exhibition Dance. Somewhere sandwiched in between was the calling of lucky numbers for door prizes and the winner of the table centerpiece. 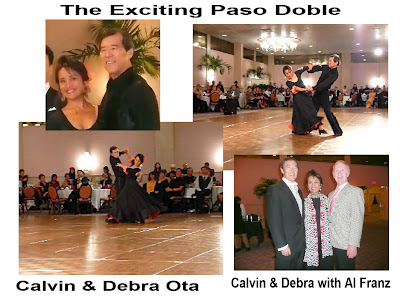 About 9 o'clock, Calvin and Debra Ota opened the Exhibition program with the Paso Doble choreographed by Albert Franz. Calvin wore a black Latin outfit and Debra dressed as a Flamenco dancer. It was what Lani and I had expected to see as Calvin and Debra scorched the dance floor with the inspiring passion, power, and strength of a matador facing a raging bull with his cape. And Debra as the "cape" shared with the required high level technical ability. A touch of Flamenco dancing and styling and the dance well performed by two seasoned dancers made it a terrific and exciting performance to watch. 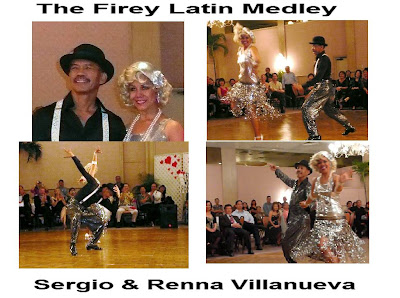 What was billed on the agenda as Latin Medley by Dance Appeal Troupe (comprised of 13dance performers) did not happen but there was fire...Latin Fire.. in the performance danced by Sergio and Renna Villanueva. Boy, they were hot to trot as they covered the entire length of the dance floor with a medley of ballroom and broadway dancing. The blond wig together with the silvery costume that Renna wore sure gave substance to their performance. Dynamite and very entertaining performance by Sergio and Renna. 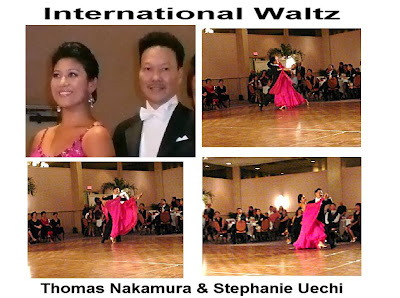 The International Waltz by Thomas Nakamura and Stephanie Uechi concluded the Exhibition Dance part of the program. Lani and I have seen Thomas dance in exhibitions and socially but this night, he performed superbly and smooth as butter with a lot of control. And as for Stephanie, the beautiful lines she displayed in her dance shows a lot of strength in her movements. A top notch International Waltz performance by Thomas & Stephanie and very enjoyable to watch.

The program as a whole was well organized. It moved along smoothly which allowed more general dancing. The night was still young and general dancing continued till closing. (Left click on photos to zoom in).
Posted by Frank at 3:22 PM