The Dancers were real! The Performances were real! The Event was real! That was Dance Hawaii Anniversary & Charity Ball at the Pacific Beach Hotel this past Saturday. Not wanting to sound like a "Judge Judy" prelude but I gotta tell you, it was a bigger shindig with eye-catching dance performances than last year's. Gotta thank the "Ball" Committee headed by Chairperson Margaret Yee and Vice Chairperson Jim Brierly. Millie Chun did good also with Decorations, and Chris Ano made sure there were Awards and Leis. Kudos also go to the invisible volunteers who handled the Silent Auction (Gilda Morita and Leilani Alcover). Special Recognition and Appreciation go to the Showcase Choreographers and Showcase Dancers who worked hard during practice to make the Program a successful and entertaining affair.
It was a big event for Lani and me also 'cause some of our dance students from Dance Hawaii Kai and Ali'iolani CSA were gonna be there. Our son Dean who assists us at Ali'iolani CSA was gonna come to the dance, too. But first, gotta pass by the lovelies at the Reception Table to get our table number. Diane Nishimura, Ann Manuel, Sandra Hamasaki, and Beverly Goo were just as cheerful reading those small prints on the table list and dishing out the numbers. 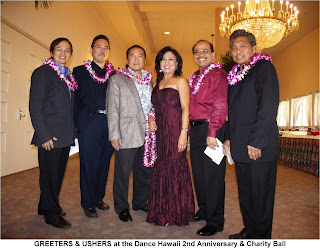 In photo (l-r) The Greeters and Ushers Benedict Doung, Ray Nariyoshi, Wally Nakagawa, Myrna Saniatan, Eddie Olegario, and Tony Alcover at the entrance to the Ballroom were just as accommodating. Lani and got real flower leis and were escorted to our table. Gotta thank Usher Committee Chair Roy Hamasaki for overseeing this treat. 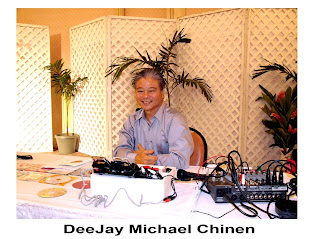 Music DeeJay for this event was Michael Chinen who is one of Dance Hawaii's DeeJays and owns one of the largest selection of the best Ballroom and Latin music. Anytime the Rumba tune is played it casts a hypnotic spell on my Super-Exgirlfriend and she chasse to the dance floor with me in tow. Maybe it does the same for other dancers, too, 'cause the floor got awfully crowded. 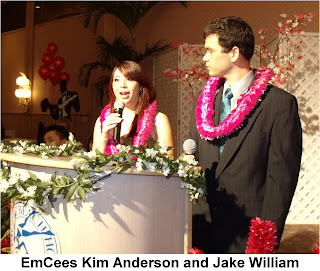 EmCees for the evening were beautiful Kim Anderson and a good-looking Jake William. Both were good at the mike in keeping the program on a steady course. But first on the program was the Installation of Officers and Board Members. 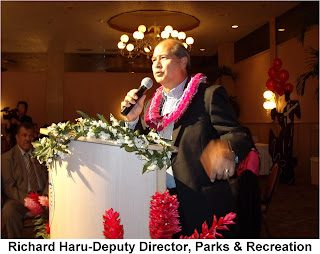 Prez Maurice Morita called on Deputy Director of Parks & Recreation Richard Haru to preside over the installation. He gave an impromptu speech to inspire the new Officers and Board members to remember and play out their responsibilities to Dance Hawaii and its membership. 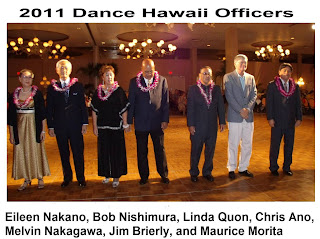 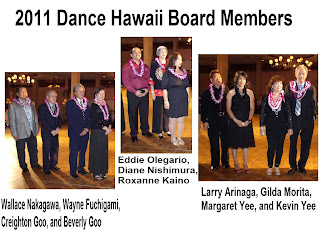 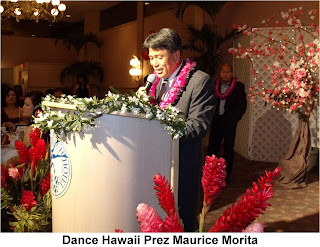 After the "Installation", Prez Maurice gave a "Welcome Everybody" speech and introduced the Special Guests and Presidents of the various Dance Clubs on Oahu, Kauai, and the Big Island.

Professional singer Kim Anderson entertained the audience with a few songs. She also sang the prayer before the buffet dinner. Gilda Morita said the invocation and it was time to gind. General Dancing continued after dinner with some time spent on calling out winners of the Silent Auction. 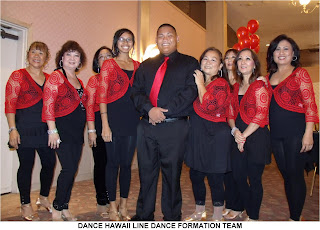 Part 1 of the Program started with Dance Hawaii Line Dance Formation Team choreographed by Kevin and Margaret Yee. It's a rare commodity to see Line Dancing included in a Ballroom Showcase but there is always a "first" time. The "Mama Mia" and "Merengue" Line Dance was a brain-child conceived by Dance Hawaii Line Dance instructors Kevin and Margaret Yee and I gotta say they pulled this one out of the surprise bag with much success. 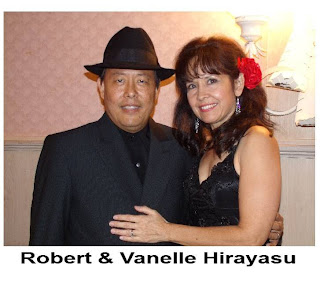 Robert and Vanelle Hirayasu who teaches for Dance Hawaii Kai this quarter danced the Argentine Tango. Lani describes the performance as a story of passionate love and hate. A little enticing to get his lady by Robert with Argentine flavor and the final blow of rejection as Vanelle walks away. Talk about love that goes astray in a movie like performance. Great acting performed in a dance! 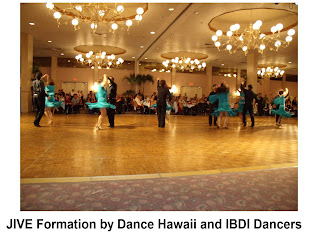 Risking another 30 lashes with a cat-of-nine wet noodles for not getting a good shot of the dancers in this routine, I've posted this candid photo. OUCH!
The JIVE choreographed by Richard and Lynn Nakamura was performed by members of Dance Hawaii and IBDI. This is the second year that these two dance organizations had gotten together to put on a wonderful performance of the JIVE. Kudos to IBDI dancers Ed & Candy Matsuda, Ernie & Karen Choy, and Roy & Marsha Ninomiya, and to Dance Hawaii dancers Maurice & Gilda Morita, Richard & Lynn Nakamura, and Larry Arinaga & Candace Yap. I've seen this formation dance a few times throughout 2010 and it gets better and better. Another superb performance! 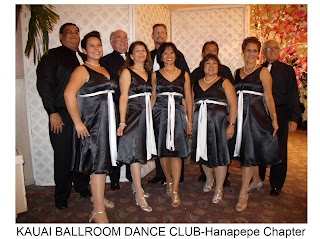 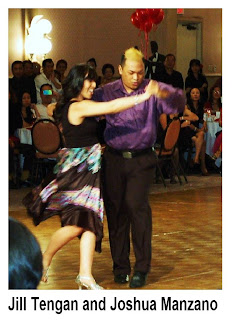 The International CHA CHA & QUICKSTEP MEDLEY by Joshua Manzano and Jill Tengen was a poetry in speed and execution....a dynamite performance well done in the spirit of Latin and Ballroom showcase dancing.
(Photo of Joshua and Jill courtesy of Chris Ano) 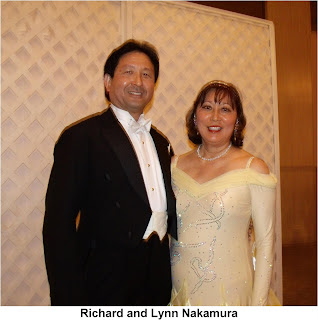 Part 2 opened with the International FOXTROT and TANGO MEDLEY by Richard and Lynn Nakamura. Once upon a time, Lani and I dubbed Richard and Lynn as Mr. and Mrs. Quickstep. After watching them glide so smoothly with their rendition of the Foxtrot/Tango Medley, it won't be long before we'll be calling them Mr. and Mrs Foxtrot/Tango, too. A performance very well executed. 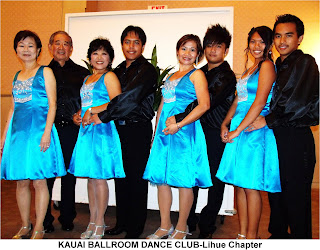 Then the Kauai Ballroom Dance Club-Lihue Chapter performed the MAMBO choreographed by Ken and Ellen Kitabayashi. In photo the Dancers were: (l-r): Ken & Ellen Kitabayashi, Bryson & Medina Calbalteja, Russel & Jocelyn Cubangbang, and William Balbin & Deza rae Fernandez. A good relationship with the Lihue Chapter brought this Mambo Formation Team to perform in the Dance Hawaii Anniversary Ball, again. It was a good performance by the dancers and a rare look into a different style of Mambo. 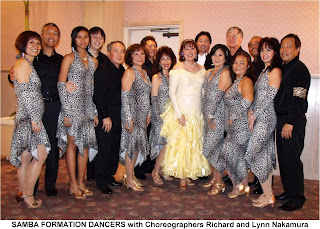 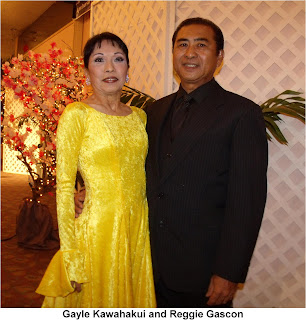 Concluding the showcase program was an International WALTZ by Reggie Gascon and Gayle Kawahakui. It was a good choice to end this part of the program. The hype was still high and Reggie and Gayle danced so beautifully that the applauses were loud and clear that their styling and technique were greatly appreciated.