The Ilima Ballroom Dance Club pulled out a big success last Saturday as the organization hosted their 28th Anniversary Dance at the Palladium. Talk about a crowded dance floor and the Team that made it a successful event. You gotta include the friendly persuation of club President Diane Wong for getting the showcase dancers from other dance clubs to perform in the Exhibition Dancing. None of them were members of the Ilima Dance Club but they came and put on a terrific show. It was a big treat for my eleven students, too. For some of them it was the first time to dance at the Palladium. 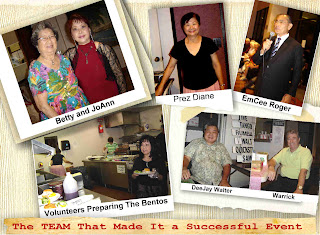 The TEAM included Betty and JoAnn at the Reception Table; Prez Diane Wong who was everywhere and that including helping prepare the bentos in the kitchen. There were other helpers too but were too busy to face my camera. Luckily I got a shot of Kay Yahiku, and also Warrick Sargent who collected the tickets for the bento. Roger Izumigawa was the EmCee for the evening who gave the Welcoming message and introduced all the Presidents of the various dance clubs who were in attendance. He also introduced the professional dance teachers/owners of dance studios. Then there was Walter Wong, the DeeJay who spun the music during the entire event.

GENERAL DANCING continued from 5PM till closing at 9:45PM.

The SHOWCASE OF EXHIBITION DANCING started at 8PM. 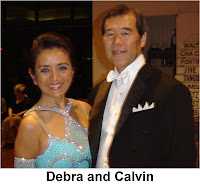 First on the showcase were Calvin and Debra Ota, my brother and sister bloggers, and the only couple that I know to have performed and competed in both the International Standard and Latin Dancing. Prior to the showcase, I had asked Calvin "where would be a good spot to view their performance". He said "anywhere because they were going to dance the length of the dance floor". And they sure covered a lot of floor space. We enjoyed every bit of the Quick Step...the front, the back, and all sides. Tonight they hit a higher level in performing the Quick Step. Very beautifully done. 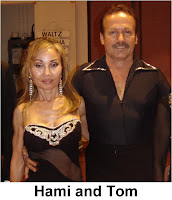 Tom Sutton and Hami Draper followed with their rendition of the Rumba. Lani loved the beautiful forms and hand gestures that Hami displayed in the dance. And I think Tom and Hami did really good in their performance of the Rumba. 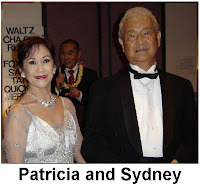 Again, another superb performance of the Waltz/Tango Medley by Sydney Chiu and Patricia Paliracio. (My apology to Sydney and Pat. The photo taken did not look flattering. So I replaced it with one taken from their previous performance.) 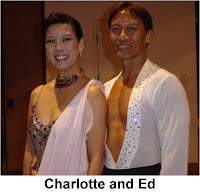 I guess I've used all the adjectives in Webster's abridged and unabridged dictionary to describe the performances of Ed and Charlotte Bugarin in previous showcases. Tonight was a another dynamite performance of the International Rumba...sensuous indeed. 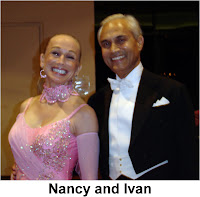 The most beautifully danced performance in the combination of American and International Foxtrot that Lani and I have ever seen for a very long time. This time by Ivan John and Nancy Luckie who were marvelous in this performance to the music and vocal of Barbara Streisand. A great performance and one that will be remembered for a long time.

General dancing continued till closing.
Posted by Frank at 2:20 AM