WOWEE! The people who came were real! The Dance magic 808 1st Anniversary Ball was real! The Program was real! And the Showcase of Exhibition Dancers and Singers was AWESOME! There were more than 400 in attendance to be entertained and to celebrate the one year birthday of this young dance organization. From infancy a year ago, this organization has grown in numbers through the capable guidance of its co-founders Richard and Lynn Nakamura...so much so that now it can take its place and rub elbows with the other dance organizations. 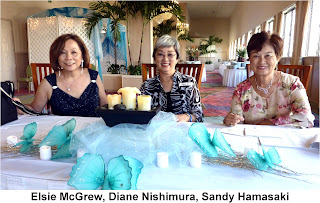 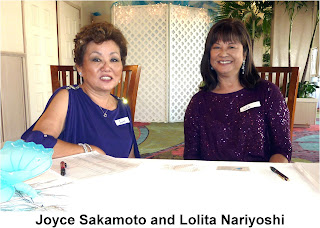 Practice makes perfect: When Lani and I arrived at the Pacific Beach Hotel Grand Ballroom, the participants for the Showcase were busy rehearsing...the singers as well as the exhibition dancers. Only volunteers and those in the showcase were allowed in the ballroom till opening time of 6PM. Still more guests came early and were in the foyer waiting to get in. At the "gate" and Reception Table were Dance Magic 808 volunteers of lovelies,  Elsie McGrew, Diane Nishimura, Sandy Hamasaki, Joyce Sakamoto, and Lolita Nariyoshi. (Sorry we missed Ann Manuel). There were also a handful of ushers to guide guests to their assigned tables...Joe Domingo, Roy Hamasaki, Bob Nishimura, and  if I missed anyone, my apology. The ushers were moving so fast it was hard to keep track of them. 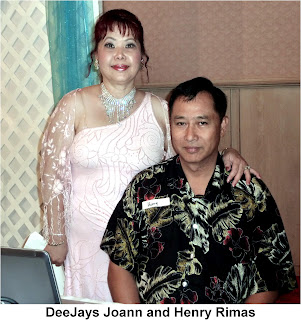 The sweet selection of dance music by DeeJays Henry and Joann Rimas echoed throughout the Grand Ballroom. As the tables were rapidly being occupied, so was the dance floor being filled with guys in debonaire apparel and ladies in colorful evening gowns. It gave an air of a Cinderella fairy tale picture.  Few Viennese Waltz dancers were whizing on the hardwood but when the Electric Slide music was played, room to dance was at a premium. 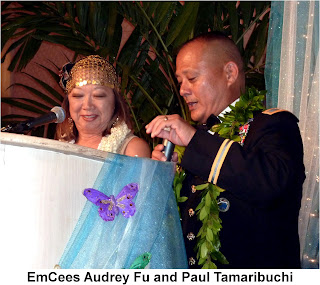 EmCees for the event were Audrey Fu and U.S. Army Colonel Paul Tamaribuchi. You gotta appreciate this dynamic duo....they were articulate in their delivery, they were funny that kept the audience interested and entertained, and kept the program running smoothly and on time. 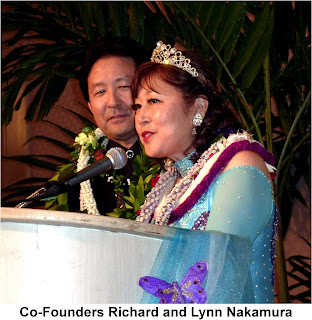 Co-Founders Richard and Lynn Nakamura gave a wonderful and feel good Welcome Message. With her message came a brief history of Dance Magic 808. It was remarkable how much this dance organization has grown in membership since inception a year ago. Soon followed was the Introduction of Dance Magic 808 Officers and Board Members, Dance Instructors, and Volunteers. As each name was called the person got on the stage to be recognized. 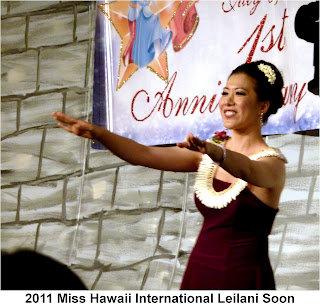 Before the Invocation by Marsha Ninomiya, a Hula was performed on stage by 2011 Miss Hawaii International Leilani Soon to the song, The Prayer. It was a beautiful and flowing dance. Then it was time to grindz.  After the buffet dinner, General Dancing resumed. Introduction of Special Guests followed and there were many from various dance clubs (Presidents and Representatives). Professional dance studios owners and teachers were also announced. 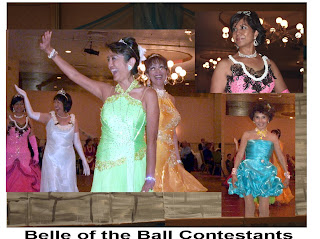 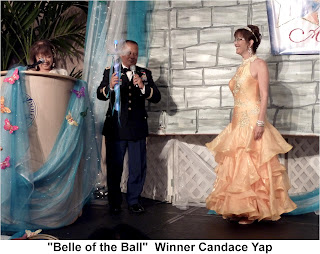 Belle of the Ball Contestants paraded around the dance floor in their gorgeous colorful evening gown for the prestigious Cinderella title but alas only one was to win the title and a monetary prize. The selected judges named Candace Yap as the winner to the title of Belle of the Ball. She was dressed in a sparkling gold gown complete with full arm laces and wearing a tiara and shiny jewelry. EmCee Paul Tamaribuchi presented Candace with the prize. 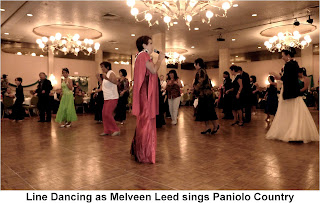 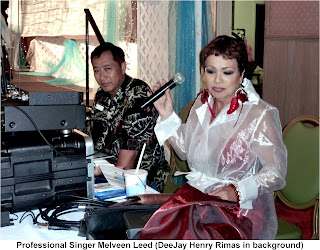 Guest Professional singer Melveen Leed opened Part 1 of the Showcase Performance with the up beat tune of Paniolo Country. That got a lot of Line Dancers on the floor to dance as Melveen belted out the Hawaiian cowboy tune. She is a terrific show person and continued on with the fast Latin tune of One Note Samba. 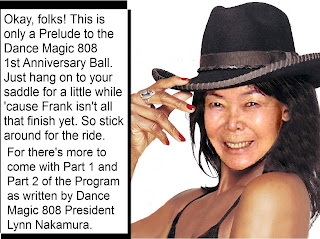