We're back on....had to pull this blog off the air to make some corrections emailed to me by Gayle.
HI Frank,
Thank you for the lovely article in your blog ..... and great pictures .... thanks so much. Hope you and Lani had a good time. I am glad you were able to get the names from Rogert Izumigawa but there is an error to the Professional dancers - Jerry Magiera is a student of Gisella West. The Professional that danced with Gisella West the Cha Cha Cha and Bolero was JACOB HIMOTO.... Is there a way a correction be made?! Thank you!!!
Aloha and see you soon,
Gayle
Thank you, Gayle for the tip. I revisited the blog and made an amendment to identify Jacob Himoto as the professional from the Arthur Murray Dance Center who performed the Cha Cha and Bolero dance exhibition with professional Gisella West.  My sincere apology to Jacob for the misidentification.
SMASHING! JUST SMASHING! That's the British Isle's lingo for a Blockbuster of a program that featured the Hawaii Gardenia Circle Anniversary Dance with talent from the Arthur Murray Dance Center, the Dance Appeal Studio, and individuals from the various dance organizations here on Oahu this past Saturday at the Palladium. It was a terrific event that concluded the three awesome anniversary balls (Dance Magic 808, IBDI , and Hawaii Gardenia Circle) for the month of August.

Lani and I got to the Palladium a little after 6:30 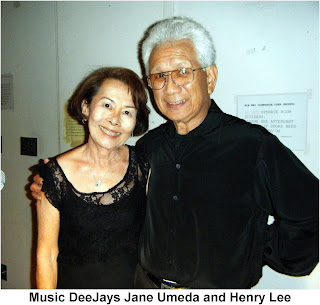 which was the scheduled time that the doors will be open to the ballroom but already the trademark music of Henry Lee and Jane Umeda was booming to the Swing tune and dancers were burning the Ewa end floor. Boy! their selection of danceable music was sweet to the ears and tempting for the dancing feet. We were greeted at the door by Hawaii Gardenia Circle 1st VP David Mayman, and Helene Tombelaine at the Reception Table. A handshake and a cordial smile and Lani and I were off to our favorite seating area but alas some dancers had already kapu the seats. No time to go huhu 'cause the music was tempting to the dancing  feet   ... didn't get to put on my good dancing shoes 'cause my main squeeze was there to dance and I got pulled to the hard wood floor. 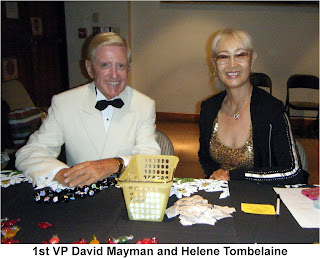 Fortunately we found a couple of seats but that was suitable only to take a short breather between dances and during the showcase part of the program. 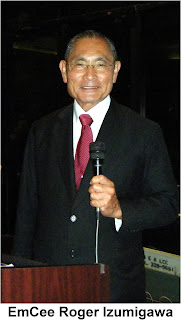 General dancing continued till about 8 o'clock when EmCee Roger Izumigawa opened the program with a Welcome Message then introduced VP David Mayman who also welcomed everyone. There were several presidents of other dance organizations and professional teachers of private dance studios in attendance. VP Mayman introduced all of them by calling out their names. A special award was given to Annie Ferguson with a flower lei presented by Gayle Kawahakui. Annie has been a dynamo in ticket sales for many dance events at the Palladium and at the Pacific Beach Hotel and has been instrumental in bringing more people to the dances. 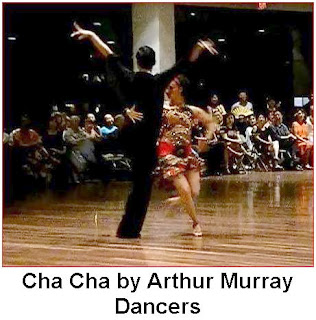 The showcase opened with an exciting Cha Cha dance exhibition by Arthur Murray Dance Center professionals Jacob Himoto and Gisella West. Their Cha Cha portrayed some pretty wild moves and if it was meant to tell a story of a jungle princess flirting with danger, Jacob and Gisella put on a good show. It was a dynamic performance that's rarely seen in local showcases. After a quick costume change, Jacob and Gisella continued with the sultry Bolero. It sizzled with enticing moves that were playful and was well perfomed.
Presenting the awards to Jacob and Gisella were Gayle and grandson Jordan Kawahakui. 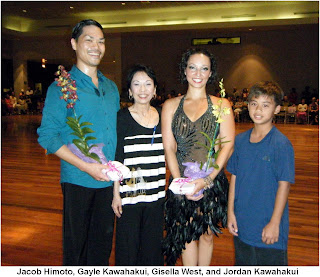 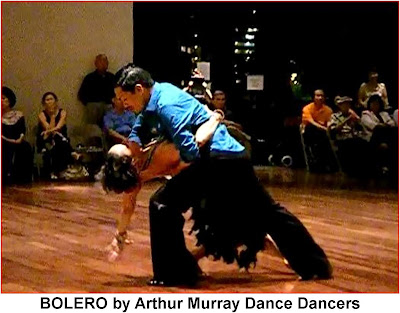 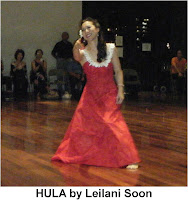 Okay, dancing is dancing and Hula is no exception. It was a wonderful addition to the showcase. Gardenia Circle brought in Leilani Soon to perform the hula which was danced to Bruno Mars' "Just The Way You Are". Leilani is a former Narcissus 2nd Princess, Miss Hawaii Chinese Queen, and Miss Hawaii International. She is a professional dancer trained in ballet, and hula. She had grace and good showmanship. Presenting the award to Leilani was Gayle Kawahakui. 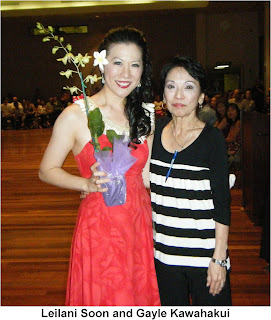 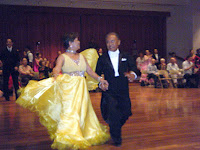 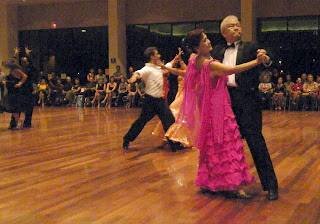 Then it was time for the Grand Ball ala Mock Competition. All the dancers were introduced as they entered the ballroom floor by EmCee Roger Izumigawa. There were so many of them that if I missed mentioning a name...my deepest apology. The individual couples were Sydney Chu & Patricia Paliracio, Mike & Lorrie Chun, Ivan John & Nancy Luckie, James & Annie Kwock, Richard & Lynn Nakamura, Ravi Narayan & (daughter) Prita Narayan, and Calvin & Debra Ota. From Dance Appeal Studio 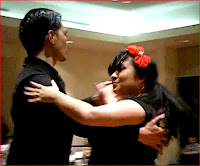 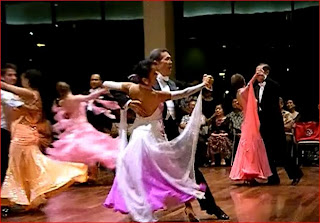 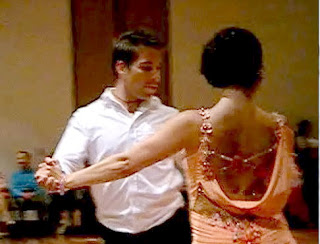 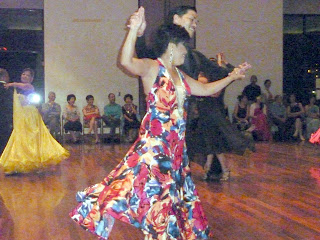 The Grand Ball started with the Foxtrot. There were so many variations in this dance but it was easy to pin point the American Style and the International Style, and the fusion of both dances. Although EmCee Roger Izumigawa encouraged the audience to "call out your favorite couples" in the mock competition, it was difficult to choose. Everyone danced like winners.

Then came the Tango. This one was purely International Style and danced with the dramatic moves of the dance. Very well done by all the participants.

No doubt the next dance was the Quickstep. It was racey and performed with breakneck speed and finesse.

The Waltz that followed was unquestionably a potpourri of American Style and International Style with a touch of fusion of both just like the Foxtrot. The blend was enjoyable to watch.

The Viennese Waltz concluded the Grand Ball. It had speed, grace, and beautifully done. 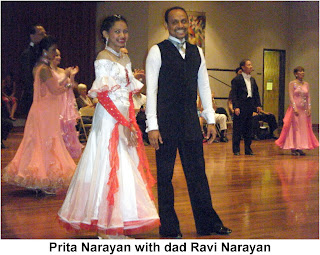 The youngest dancers in the Grand Ball were Prita Narayan who danced with her dad Ravi, and Ikaika Villanueva and Brandee Nakamura. Several "Ironmen" as I refer to them becauce of their vim  and vigor and who danced with more than one lady partners. They were Sergio Villanueva who danced 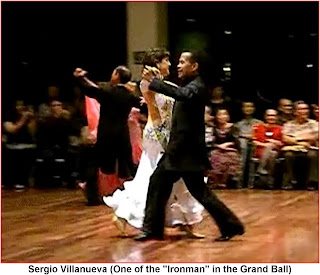 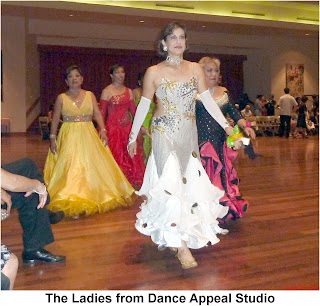 This year's Hawaii Gardenia Circle Grand Ball had the most colorful costumes and the ladies looked beautiful and elegant. The men were just as suave. The program was well organized and EmCee Roger Izumigawa kept it moving smoothly from beginning to end. Awards were given to all the participants in the Grand Ball as they were individually called to the dance floor for final curtain. 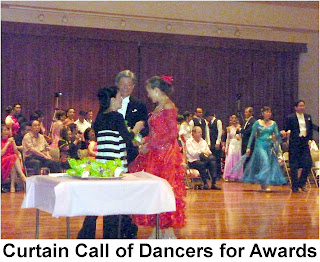 General dancing continued as presale ticket holders filed out of the ballroom for refreshment on the lanai. My sincere thanks to EmCee Roger for sharing his list of names of the dancers who participated in the Grand Ball.

It was an event filled with magnificent showcase entertainment, and good dancing to Henry and Jane's best selection of  dance music. Refreshments were served to presale ticket holder on the lanai. General dancing continued till 9:30 but for Lani and me, it was time to hit the road back home and dig into the ono dim sum refreshment. Dat's all fo' now.