Dancing In Paradise: The Dragon Ball 2012 Part One

This blog on Bantay Bata's Dragon Ball at the Pacific Beach Grand Ballroom on August 24 is not gonna be an easy task. There were many volunteers involved in this annual event in making it a successful one. So please stay cool while I unrevel the threads of Dancing In Paradise as I can remember. After all, my main squeeze had squeezed nearly all of my energy by her merciless drive to dance my A**Off that night.

Lani and I got to the Pacific Grand Ballroom mighty early. No one was at the reception table but there were guests milling around the ballroom. Cammy of Dancewares Hawaii was at the entrance of the ballroom with her dance boutique with 10% discount for Bantay Bata ticket holders. Soon, Buffy came to the reception table and checked us in. Inside the ballroom, Sergio Villanueva greeted Lani and me while Calvin Ota was surveying the dance floor to measure the available space for the exhibition Waltz dance that he and Debra were gonna perform in the showcase. The ballroom was half as large as last year's. Another Filipino group occupied the other half and both ballrooms were filled to the brim. 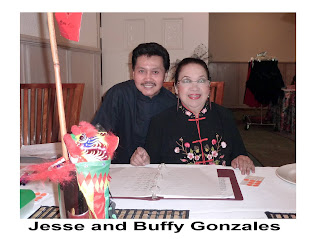 It wasn't quiet 6PM but there was no holding back the sweet music coming from the stage by the Dee Jay Jesse Gonzales. Jesse has a rare talent of mixing canned music with his vocal chords and that made the dance music more extraordinary and appealing to dancing. Of course that got my main squeeze all hyped to start dancing before the floor got too crowded. 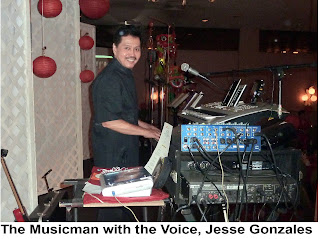 Before I move on any further, I gotta thank Paul and Marie Laderta for inviting Lani and me as their guests to this event. Paul and Marie have been prominent mainstays at Bantay Bata events as far as I can remember. They are good and inspiring people for this charity event and have brought their friends from Divino Ritmo Dance Studio to give an exciting showcase performance this year again. Paul and Marie are part of the Directors/Counselors for the Project for Bantay Bata. Paul also holds the distinction of  the Ballroom Creative Designer. The table centerpieces and the colorful Chinese ornaments that decked the inside and outside the ballroom were his creations. In keeping in tune with The Dragon Ball, both were dressed in Chinese costumes. 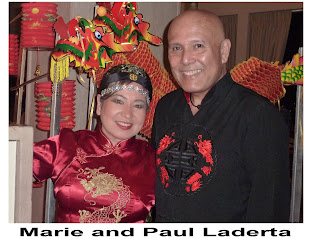 Okay, I gotta cut to the chase otherwise this blog is gonna take me to Christmas to get it all done. The preshow program opened with welcome remarks by EmCee Eric Barsatan. Representatives from various dance organizations, and Professional dance teachers were introduced.

Bantay Bata is a social welfare program that was first established in 1996 in the Philippines. Since 1996, it has become one of Asia's best child protection and welfare organizations, providing a multitude of integrated programs and services. Its initial intention was to help Filipino children who were victims of abuse. In its continued growth, it became a charitable organization for victimized children in the Philippines on many levels. Its mission is simple: to create and provide a safe, nurturing and loving environment where underprivileged, abused, medically ill, and undeserved children of the Philippines can develop and realize their full potential. 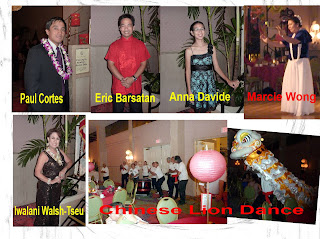 Followed by the welcome remarks was a Hula dance by Marcie Wong. Invocation was said by Iwalani Walsh-Tseu. It was filled with passion for the "project" and appreciation for those who support it. Then the Star Spangled Banner was sung by Anna Davide. Such a lovely and strong voice that echoed throughout the ballroom. The Philippine National Anthem was sung by Deputy Consul General of the Philippines Paul Cortes. A great and strong voice, too. There was a Chinese Lion Dance complete with heavy drumming, a Chinese Lion, and a following of Chinese Kung Fu club members to guide the "Lion" as it moved among the crowd of guests.

The dinner buffet soon followed while general dancing continued. The buffet included some Filipino delicacies. It sure complimented the atmosphere and the other entries. 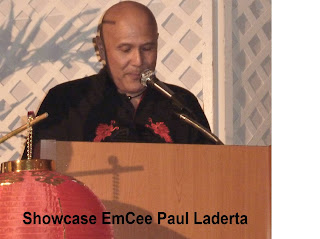 The Showcase Program was EmCeed by Paul Laderta who did a terrific job introducing each performance with a brief bio of the performers. 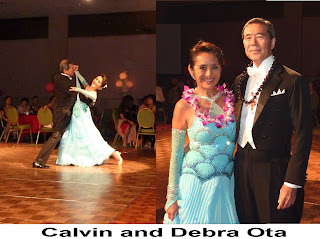 Our friends Calvin and Debra Ota opened the show with the International Waltz...but was billed as Slow Waltz. Lani and I felt that it was gonna be a treat for us as well as for the audience 'cause we watched Calvin and Debra more times dancing the Viennese Waltz or the Quickstep at full throttle. I gotta say that the slowdown really showed that they have finesse and absolute control with impeccable technique. 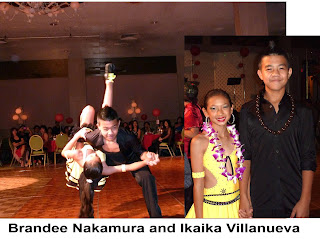 It was a breath of fresh air just watching Ikaika Villanueva, the grandson of Sergio and Renna, and Brandee Nakamura come on the scene lighting up the fire with the Jive. Almost like watching their teachers Sergio and Renna dancing the Jive. It was fast and furious and combined with some hot flashes of spins, dips, and lifts. Ikaika and Brandee are a hot item to watch in future events. 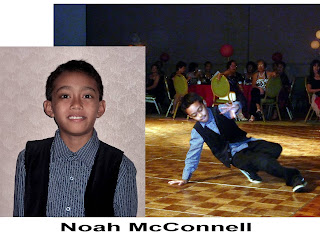 This 10 year old Hip Hop dancer came from the Philippines and my guess is that he performed in last year's Bantay Bata, also. Pretty cool moves coming from one so young. Noah along with his dad (Jim) and mom (April) sat at the same dinner table with Lani and me. Got to learn that Noah was raised in an orphanage in the Philippines and was later adopted by Jim and April when they visited the orphanage. 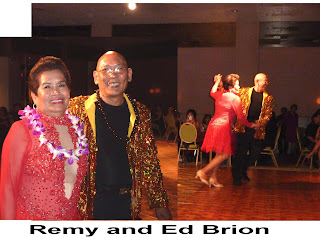 Who said that Swing dancing was only for the kids? Ed and Remy came on all fired up with the East Coast Swing and kept the heat on all through the dance. It was good to see these two senior teenagers burn the floor without any hint of fizzling out. 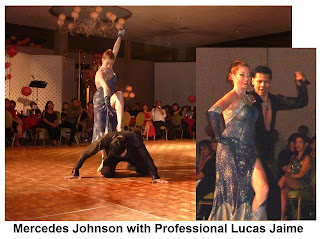 Tango Cha Cha Medley was performed by Mercedes Johnson and Professional Lucas Jaime. And it was entertaining, vigorous, and in the illustrious manner that Lucas reveals a story in this performance There was passion of love and hate in the Tango, and much fun in the Cha Cha. 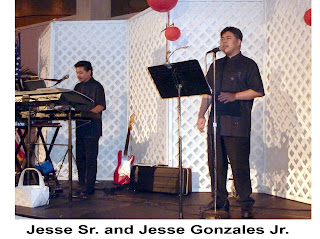 With the end of Act One, General Dancing continued for 15 minutes with Jesse and son Jesse Jr. playing and singing hot swing and romantic Latin music. The dance floor got plenty crowded and everyone were having fun dancing to the music. 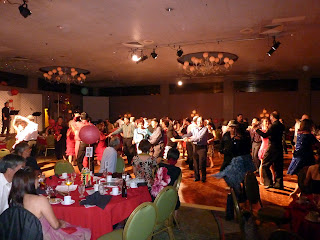 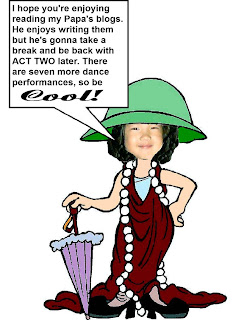