Dance like Michael Jackson to "Thriller"? Nah! Not likely but possible. And posible it was by the young, dance students of Roxanne Kaino. She brought her troupe to Kahala Mall Centerstage today to treat shoppers to a dance performance of  "Thriller."  And they did a good job. Appropriate time, too, since it's getting close to the night when Zombies and the Walking Dead will roam the streets.

I got to the Mall a short time before the show started. There was a large Saturday crowd  waiting near the centerstage. Nearly all the seats were occupied. It was SRO (standing room only) and the show promptly started at 12 noon. Roxanne who was the emcee announced, "five minutes more to go". And when it got to the last 10 seconds of the final minute, there was the usual count down (10-9-8-7-6-5-4-3-2-1) roared by the audience.
. 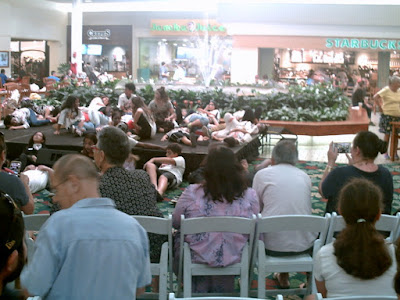 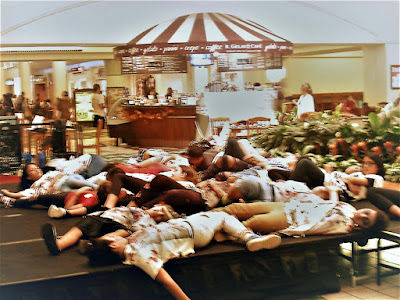 The dance performance of Thriller can be viewed on YouTube "Thrill the World 2018 Honolulu".  The full six minutes performance was posted by Roxanne Kaino. (Much thanks, Roxanne).

After the dance performance of THRILLER, the participants encored with the group singing "We Are The World, We Are The Children".  It was a good touch for a too short program but none-the-last it was an entertaining dance performance and well performed by youngsters that were appreciated and applauded loudly by the audience.

Aloha for now and Happy Dancing!
Posted by Frank at 9:35 PM