The 4th Week of October That Was 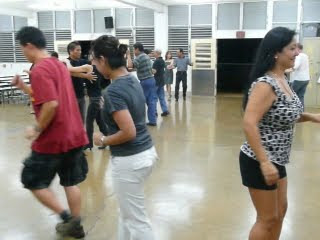 I know! I know! I've been laying low for a while! Hope you all enjoyed reading the terrific blogs by Geoffrey, Calvin, Maile, June, and da Specter.
Okay, Students of Dance, I haven't been idle, though. On Monday my Cha Cha and Swing Jitterbug class resumed after a 3 week stretch of breaks. Lani and I did an extensive review of all the patterns taught prior on both dances. Wasn't too bad in getting the students back to the level they left three weeks ago. Got to squeeze in the SIDE PASS and CUDDLE in the Swing, and the CHA CHA CHASE before calling it a night. 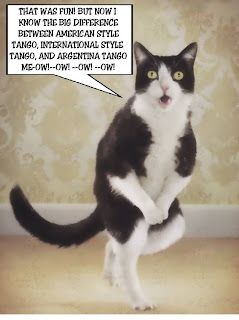 Come Tuesday, Lani and I headed for Dance Aliamanu to pick up some tickets for their 1st Anniversary & Charity Ball from Maurice. The American Ballroom Line Dance was in session with Kevin and Margaret Yee instructing. Good number of students. Got to meet and chat with Maurice's main squeeze Gilda. Friendly and gracious lady. The second class Argentina Tango with instructors Robert and Vanelle Hirayasu started after a short break. Simple patterns but a good introduction to this style of Tango and the intricate patterns to follow. 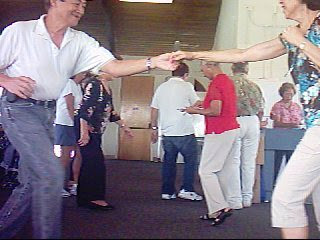 Wednesday was a big day for Lani and me. Rummage Sale at the Kokohead Seniors Club in the morning and teaching Foxtrot and Tango in the evening. The Rummage Sale got off to a good start with nearly every member bringing in a lot of "white elephants". Only thing they were mostly girly things...no guy stuffs. Lani had this wild idea to spice up the "Sale". She asked me to be like a "gigolo". You know...dance with the ladies for 50 cents a song. And dance I did with several ladies...Swing, Cha Cha, Tango, Waltz, and Rumba. Low budget but it was fun. All proceeds went to the Seniors Club along with whatever the Rummage Sale brought in. 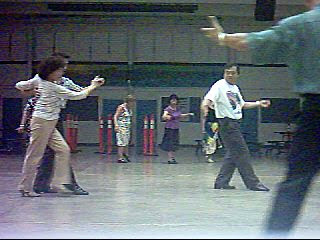 Evening came and it was time to head to Kaiser CSA for our Foxtrot and Tango class. Lani suggested that we teach the new steps first and then go back to reviewing the ones we taught previously. The students were all in favor of it. So we got to introduce the RIGHT TURNS pattern in the Foxtrot. Then reviewed all the previous patterns in sequence. We did the same for the Tango by teaching the LA PUERTA (photo: starting count 5 & 6) and then going back to reviewing the previous Tango patterns. It was humid but the students kept plugging along on both dances. Lani and I think they liked the new format.
That's a wrap for this week. Keep on dancing!
Posted by Frank at 9:21 PM