No dance class at Ali'iolani CSA last night. When Lani and I got to Ali'iolani, the cafeteria was occupied by a political meeting. AUWE! It was crunch time trying to reach all our students with the late notice. Anyway, I think I reached everyone who gave me their phone number. To those I couldn't reach because of out of state numbers or decided to go incognito, my apology if I didn't reach you. But no HUHU! There's a make up class next Monday (8/2)...same time, same place. 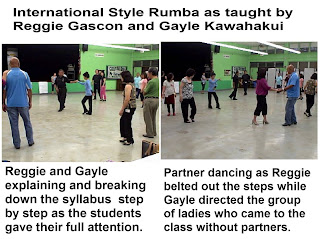 Lani and I had a free time, so we decided to visit Dance Honolulu at Washington Middle. Our students Ron and Mariane had the same idea. Reggie Gascon and Gayle Kawahakui of Dance Hawaii were teaching the International Rumba to about twenty students. Reggie was very precise in instructing the movements and Gayle complemented his every move. Lani and I stayed just for a little while but it was enough time to witness a whole lot of the excellent teaching techniques of Reggie and Gayle.
Posted by Frank at 1:36 AM