IBDI held its monthly dance this past Saturday at the Palladium. It was a combination of Business Meeting for the Election of Officers for the 2012 year, a Recognition for October Birthees, and an early Halloween Costume Contest plus Social Dancing. Quiet a large package for one night but enough time to bring some fun dancing for the number of dancers who came to dance and that's including some of my dance students. The election of officers went smoothly, and the recognition for the October birthday gals and guys received a lot of applauses. 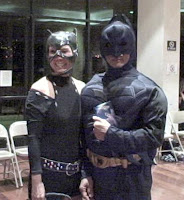 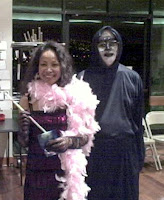 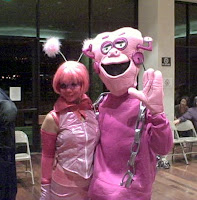 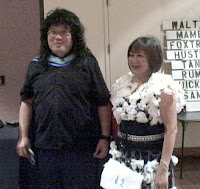 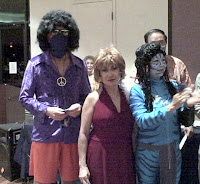 This year's Halloween Costume Contest brought in some unusual characters including Superheroes, Fairy Tales personalities, scary ghouls, Hollywood celebrities, and an "Outer Space" pink gal and a pink Gummy. OOOOPS! He did look like a Gummy character but in pink, and again maybe not. So I leave it in the eyes of you readers to guess. Anyway, the "Outer Space" couple won the 1st prize and I'm guessing that I met that cute space gal somewhere. Hmmmm! I didn't get the chance to congratulate the lucky couple 'cause they were gone in a flash of light....like being beamed back to the spaceship??? Auwe! But you gotta applaud all of them who participated in the costume contest for bringing joy and entertainment to the dance.
General Dancing with music by DeeJay Henry Lee continued on with a short break with the Horseshoe Icebreaker Dance. That brought a whole lot of the seatwarmers on the dance floor. More general dancing continued during the snack break and I gotta say that the sandwich was one of the best I've eaten...simply onolicious.
Posted by Frank at 4:03 PM