The long awaited day finally arrived and Lani and I were on HAL flight to Kauai for the Kauai Ballroom Dance Club 7th Anniversary Ball. It was a late afternoon flight but the plane was packed to capacity with tourists, people returning back home to Kauai, and a whole bunch of dancers from IBDI and Dance Magic 808 and maybe some non-member dancers who just like to travel to go dancing. I get the feeling that Lani and I could be included in that last category, too. Took just about 30 minutes of flight time to get to the Garden Island and no sooner after we landed, we were off to meet our ride (by our friend and travel agent Roy Hamasaki and wife Sandy) to the Marriott Courtyard in Wailua. I guess Lani and I were too excited about this trip that we almost forgot to claim our one luggage. Good thing we had to pass the Claim Luggage area before departing the airport....would've been a disaster if we left without our luggage and went to the picnic and the dance with the same clothes we arrived with. AUWE! Got to the Marriott with enough time to check in and then scoot off to the picnic at Poipu Beach Park. Took about a 45-minute ride but the scenery along the way was fabulous. It's been nearly 20 years since Lani and I visited Kauai and I gotta say there's been a lot of changes since then.

The picnic was well planned by the KBDC and hosted by the Hanapepe Chapter. Onolicious home-cooked buffet and a few over-the-counter pastries for dessert but mostly home-baked. It was an atmosphere of of home-style and family-style get together. This is where we met for the first time the "Big Whips" of the Lihue Chapter and the Hanapepe Chapter. "Big Whips" sounds too bossy for the Officers of those dance clubs. They were a friendly bunch and "Friendly Hosts" would be a more appropriate description. And then there was Gracie Takabayashi, a fan of my blogs and a shutterbug like me but I gotta confess that she is moreso than me. Her camera worked overtime at the picnic as well as at the "Ball" which is a sign of a good photographer.
After the ono buffet dinner, it was time for small speeches like welcome kine by Dan Works, President of the Hanapepe Chapter. 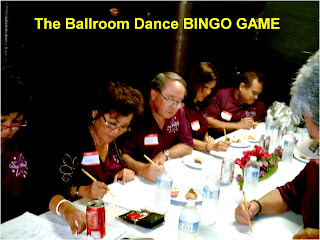 Then the fun began with the Ballroom Dance Bingo game. Whoever devised the game must've gone through the Dictionary of Dance to get all the names used in ballroom dancing. The game was a brilliant idea and kudos to the person who came up with this akamai game. There were four winners for the Bingo game that received prizes. 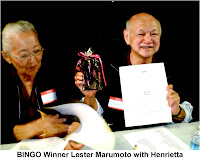 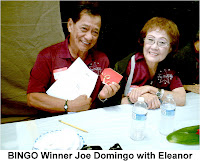 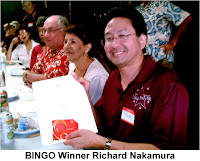 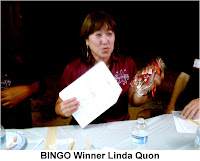 More games followed. One in particular was "Find Your Partner". Everyone was given a name tag with names of characters from a movie or fairy tale and we had to find a matching partner. There were about 50 people at the picnic and it took a while finding the corresponding partner. 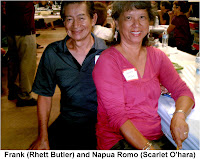 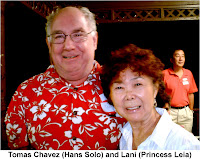 There were five couple winners in this game and just happened that Rhett (dat's me) and Scarlett (Napua) found each other and won a prize of packaged candies. Lani (Princess Leia) and Tomas (Hans Solo) just missed the count by a few seconds. 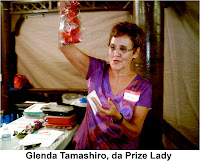 Glenda Tamashiro, Secretrary of the Hanapepe Chapter was the "Prize Lady" who gave out all the prizes to the lucky winners of all the games. 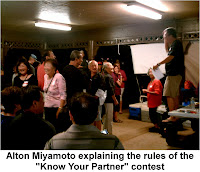 Alton Miyamoto conducted the "Know Your Partner" contest where couples would stand back to back and raise their hand if the answer pertaining to the question was mostly about them. The elimination went quickly but a young couple, Lynn Jackson and Taylor Campbell, who remained standing won the prize. 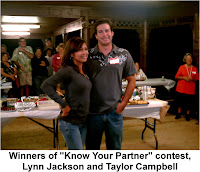 Goes to show that "they knew who buys more dance shoes" and "who remembers most of the dance steps", for example. Congrats to the attractive couple who knew each other very well.

There were so much food left over that it was time to dig up the "doggy bag". I know, I know! es not a nice word to use but you know what I mean. The pastries I managed to take was a welcomed midnight snack after our one-stop to McDonald's along the way back to the Marriott for a hot cup of coffee.

It was a big and tiring day for Lani and me but the excitement of the trip, the friendly people and games at the picnic took time for us to cool down to a slower pace. I didn't get to sleep until past 2AM Saturday morning. Then the phone rang at 7:30AM from Sandy..."you want to go eat breakfast?" Another day of sunshine and another story to tell but later........
(Left click on photo to zoom in).
Posted by Frank at 12:27 AM