Well it's Saturday morning and the big question of our "free" day is "What You Gonna Do?" Got all the heavy jobs all done with....weed-wacking and mowing the lawn yesterday. So Lani asks again "What You Gonna Do?" Well there was a few errands to do around town but we gotta be back in time to get ready for the IBDI Holiday Celebration at the Palladium...at least get there in enough time to pick up our prepaid bento. The "joint was jumping" as the saying goes when we arrived at the Palladium. At the Reception Table were the familiar friendly faces (Dana, Delia, and Jimmy). There were friendly greeters at the door, also, passing out tickets for door prizes. 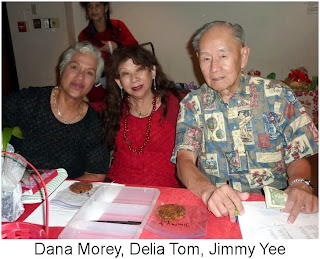 The dance floor was just as jam-pack as the weekend before at the Pan Pacific Christmas Dance. I could tell that it was a full house 'cause there were only a few chairs left on the rack and more guests were trickling into the ballroom. Henry Lee and Jane Umeda were the DeeJays for this event and no mistaken that their selection of good dance music were calling more dancers onto the hardwood floor.﻿ 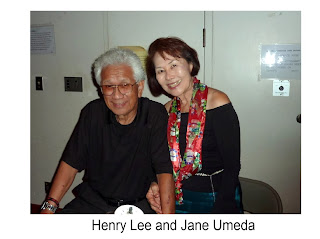 ﻿
Come about 8 o'clock, EmCee Arnold Lee welcomed everyone to IBDI Holiday Celebration. After a few encouraging words he handed the mike to IBDI Prez Chris Jay. 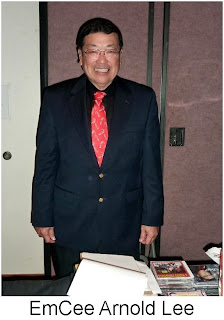 Prez Chris Jay had just arrived from another event and he apologized for not being attired for the occasion. His "welcome message" and appreciation for all that came to the dance included introducing the presidents and representatives of the various dance organizations and the professional teachers/owners of the private dance studios, and Emi Matsuoka, a familiar personality in the dance world. His gratitude extended to those who worked hard behind the scenes to make this Holiday Celebration a successful one, to New Aala Bakery that provided the cookies for refreshment, and to Divino Ritmo Dance, and to Dance Appeal Dance Studio...the two professional dance studios participating in the  exhibition showcase for IBDI. It was also Chris Jay's "swan song" as he leaves the position as IBDI President which he held for many years. IBDI has thrived under Chris' capable leadership during his tenure.     ﻿ 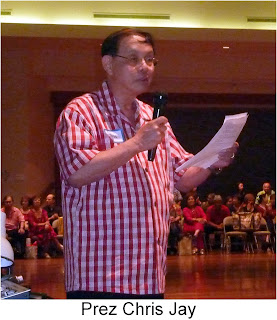 General dancing and the call for door prize winners soon followed before the dance exhibition showcase started. Calling out numbers for door prizes was EmCee Arnold Lee and assisted by the new 2014 IBDI Prez Marsha Ninomiya. 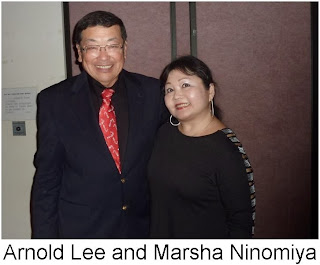 The Showcase started with the Divino Ritmo Dance Formation Team performing "Black and White"...a tribute to Michael Jackson and choreographed by Ms. Yanna Samkova. It was only the second time "Black and White" was performed by the DRD Formation Team. The first time was at the DRD 5th Annual Grand Ball and Showcase World of Music at the Sheraton Waikiki Hawaii Ballroom last month. 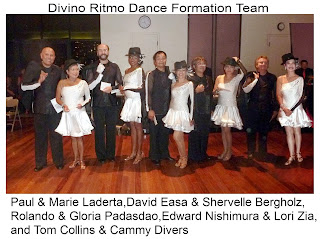 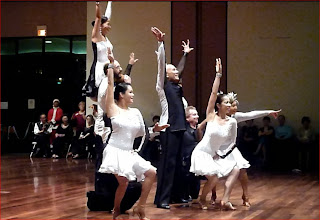 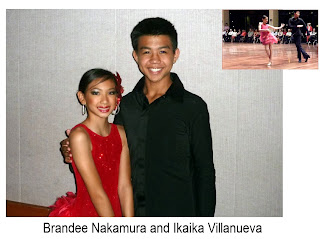 Next to perform was the couple of David Matsumoto and Renna Villanueva dancing the Cha Cha that was choreographed and coached by Mr. Geoffrey Fells. It was David's first-time exhibition performance. 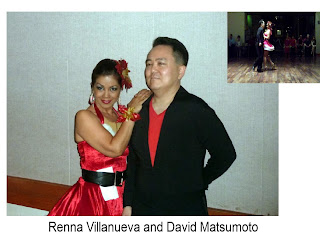 Galloping onto the dance floor at high speed was the couple of Sergio Villanueva and his student Barbara Kaneshiro dancing the Quickstep. 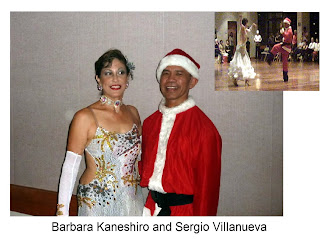 Concluding the Segue was the couple of Lopaka and Michelle Burgess who gang-bustered onto the dance floor with the Jive. 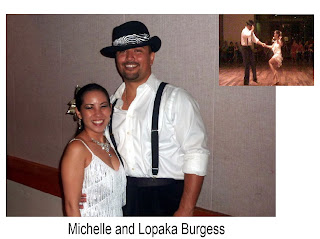 Closing the showcase was the DRD Junior Pro/Am performace by Tristan Racpan with Yanna Samkova dancing the Jive choreographed by Ms. Samkova. Coached by Yanna, this talented youngster is one of Hawaii Dancespot, Inc. scholarship recipients. He loves to dance and to perform and is a member of DRD Keiki Dance Troupe. Besides ballroom dancing, he has ballet and hip hop under his belt and hopes to become a professional dancer one day. During last night's performance of the Jive, he showed his talent in the hip hop with a touch of break dancing. 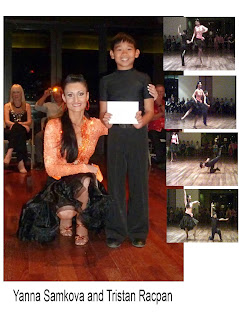 To the keep the hype going, Richard and Lynn Nakamura led a line dance called "Wild, Wild West". That got nearly everyone off their seats and dancing on the dance floor. 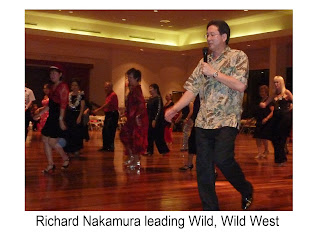 It was refreshment time and most everyone headed for the long line outside on the lanai. Delicious cookies from New Aala Bakery were served by the friendly and smiling faces of..... 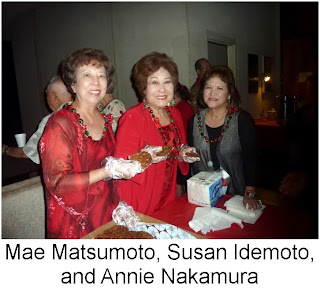 These cuties were in line for the cookies, also. Because I said that I was gonna submit this photo to PlayBoy Magazine, their names have been left out.
(Just kidding). 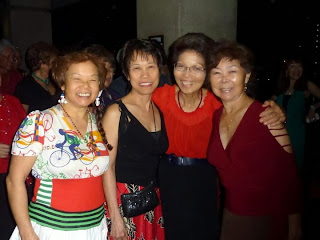 It was good to see Mr. Fells at this Holiday Celebration and see his student David Matsumoto perform the Cha Cha with Renna in the showcase.

From Happy and Smiling Santa Sergio and Beautiful Renna...they wish all of you a Very Merry Christmas. Me too! 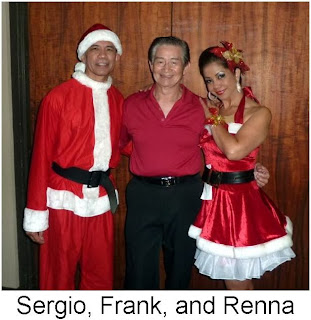 More lucky numbers were called for door prizes, and general dancing continued till the call of "last dance".  Many thanks to EmCee Arnold Lee for sharing his program notes with me. It was an enjoyable evening for Lani and me....dancing, socializing with friends and watching a showcase that was short and sweet and colorful with the sparkle of entertainment.
Posted by Frank at 1:41 PM