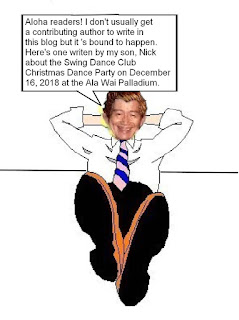 The Swing Dance Club held their Christmas Dance Party at the Ewa side ballroom of the Ala Wai Palladium on Sunday, December 16. The Dave Toma Band was invited to play live dance music for the party by club member Rusty Chun. 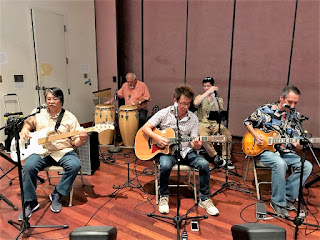 The band played a mixture of Swing and Latin dance music with occasional Christmas tunes from 6:00 to 7:30 PM. The guests seemed to enjoy the music and were dancing up a storm while the band was playing. There was a short break for the band as Door Prizes were called between 7:30 and 7:45.

General dancing resumed with recorded dance music the rest of the night. Someone had set up a small speaker and was playing music from an MP3 player or iPod. The music sounded really great.

Tables were set up near the kitchen with an amazing spread of food including roast turkey, ham, corn, stuffing, pork adobo, and salad.  A lot of ono food and members of  the band were invited to partake. 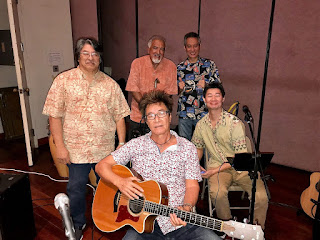 Members of the Band are Dave, Fred, Alan, Jesse, and Nick.

Aloha for now and Mahalo to Nick for writing this blog.
Posted by Frank at 11:48 PM