Okay, students of social ballroom dancing, it's about a month before we start with the Fox Trot lessons at the Ali'iolani CSA and Kaiser CSA. Good to know where Harry Fox fits in and how the Fox Trot came to be...just like goin' back to school fo' history 101. So here's the scoop as written in partner dances. 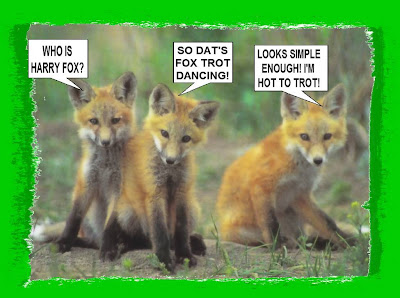 Stories about the origins of this dance center around the name Harry Fox. Some identify him as a Ziefeld Follies performer who, in a 1914 performance, introduced a kind of jerky, trotting sequence of steps to ragtime music. The public, captivated by his movements, began to perform them in popular ballrooms. Supposedly the original twelve energetic steps were drastically modified, slowed, and smoothed out over the next few years to the three-step and four-step versions we know today.

Other stories refer to Harry Fox as a bandleader in 1914 in New York, who modified ragtime music. The dancers responded by combining the One-Step and Two-Step and calling the mixture the Fox Trot.

Whatever the exact origin, the medium-to-slow version of the Fox Trot is still the perennial standby of ballroom dances. What we now call "slow dancing" is really the Fox Trot, a dance so simple that you, too, will be Hot To Trot!