If you weren't at the Dance Hawaii Furlough Friday Halloween Social Dance at Radford HS this past Friday (10/29), then you must've been at the Pan Pacific Ballroom Dance Society 36th Inaugural Ball. Lani and I got to the Pacific Beach Hotel Grand Ballroom a little early to be assured of finding a parking space. No problem encountered...lots of parking at the upper level. The lovelies at the Reception Table were very friendly as Lani and I checked in for our table assignment. Marie Perreira, who we met some years ago when Lani and I were dance instructors for IBDC (now IBDI) greeted us. It was a classy affair because there were ushers that escorted us to our table which was at front row. It was a vantage location 'cause we got to see who were entering the ballroom.....friends and acquaintances...Paul & Marie Laderta, Calvin & Debra Ota, "Uncle" Wes, Stanley & Annie Nakamura, Yanna Samkova & Lucas Jaime, IBDI Prez Chris & Mrs. Jay, PPBDS Prez Rudy Luat, KI (who posts and shares the monthly Palladium Schedule on Dance Fever Oahu), and members of Dance Hawaii, etc. 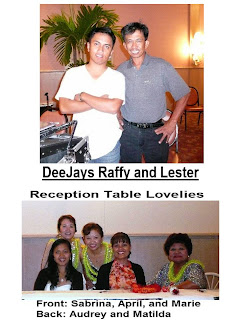 I gotta mention that the selections of dance music by the duo DeeJays Lester and Raffy were awesome. The tunes were stringed together so there was no break when one song ended. Lester and Raffy played just about every conceivable dance music one could think of including "Da Twist". I especially liked their great selection of Swing and Latin music which kept Lani and me on the dance floor till we ran out of vim and vigor. AUWE! 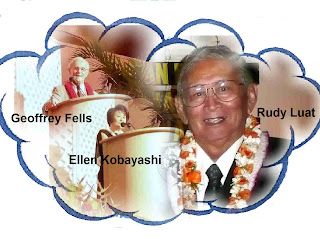 EmCee of the Ball organized by Event Chair Ed Felix was Ms. Ellen Kobayashi who handled the podium with ease. She had a welcome speech of her own and recognized all the Presidents of the various dance clubs who attended this function; professional and non-professional. Prez Rudy Luat took to the mike shortly with a welcome speech and special recognition for Dance Hawaii's efforts in raising monetary funds for the various public schools. Special guest and dance icon Geoffrey Fells was introduced and who gave a wonderful and encouraging advice on the subject of responsibilities to the newly elected officers for the dance club. It was good to see Geoffrey back in the dance ballroom. He was also charged in installing the newly elected officers. 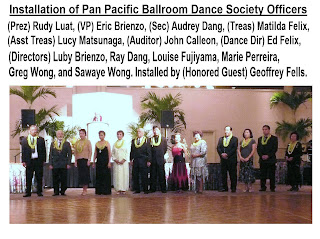 It was Japanese Buffet Dinner and as usual the entries were top notch. Invocation was said by Jim McConnell and nicely delivered.

More general dancing continued before the Dance Exhibition part of the program and again the music was superb.

The Dance Exhibition featured The Tango, The Hustle, The Quickstep, The Cha Cha, and The Waltz.

Ed and Matilda opened the program dancing the INTERNATIONAL TANGO with a lot of bold movements. A truly macho dance with strength and flair. It was a TERRIFIC performance by both dancers.

Now if you're a NightClub buff, you gotta see Fil and Elvie dance the HUSTLE. It must've been more than 5 minutes of continuous intricate moves that they showcased at the Ball. But they didn't seem to be running "out of gas". An excellent and entertaining performance by Fil and Elvie.

Quick as their footwork could move, Larry and Mary danced the entire dance floor with finesse and the glamour of THE QUICKSTEP. Excellent control and very well danced.

THE SAMBA by Ed and Charlotte was electrifying and very entertaining. Both dancers showcased a "explosive performance" that probably tipped the Richter Scale. It was a dynamite interpretation of a Latin dance by two very experienced and skilled dancers. 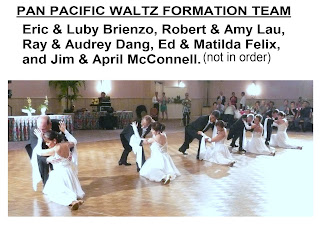 The Formation Team closed this part of the program with a beautiful WALTZ. I asked Lani what was it that she liked about this performance. She said that the pretty white costumes the ladies wore was really a plus to their smiles, that the Team was relaxed and confident in their movements that it made like the couples were flowing from one pattern to another effortlessly, and she liked the way the dance ended with the guys bending low to the gals almost in a kneeling position on the floor. What else can I say? 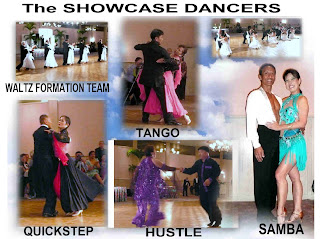 General dancing continued till closing about 11:30. Special Thank You to Sawaye Wong for the Inaugural Leis, and to Emi Matsuoka for the Flower Centerpieces (of which I was one of the lucky ones to win and bring home). It was a grand evening of social dancing, ono kine buffet, and a very enjoyable showing of exhibition dancing.
Posted by Frank at 3:18 AM